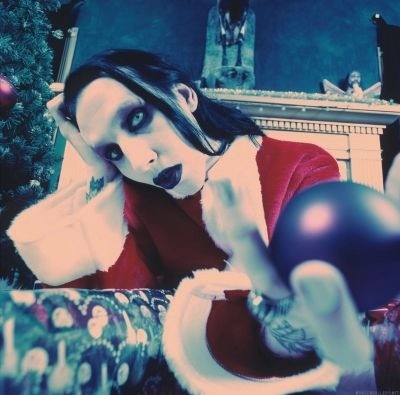 In A Christmas Carol, Charles Dickens associates coldness and darkness with vice and melancholy, while warmth and brightness are associated with virtue and merriment. He effectively uses these to establish for the reader the abyss that exists between that which is evil and that which is good.

We see this in how Charles Dickens describes the weather:

"It was cold, bleak, biting weather: foggy withal: and he could hear the people in the court outside, go wheezing up and down, beating their hands upon their breasts, and stamping their feet upon the pavement stones to warm them. The city clocks had only just gone three, but it was quite dark already—it had not been light all day—and candles were flaring in the windows of the neighbouring offices, like ruddy smears upon the palpable brown air. The fog came pouring in at every chink and keyhole, and was so dense without, that although the court was of the narrowest, the houses opposite were mere phantoms. To see the dingy cloud come drooping down, obscuring everything, one might have thought that Nature lived hard by, and was brewing on a large scale."

We see this in how he describes Ebenezer Scrooge:

"The cold within him froze his old features, nipped his pointed nose, shrivelled his cheek, stiffened his gait; made his eyes red, his thin lips blue; and spoke out shrewdly in his grating voice. A frosty rime was on his head, and on his eyebrows, and his wiry chin. He carried his own low temperature always about with him; he iced his office in the dog-days; and didn’t thaw it one degree at Christmas.

External heat and cold had little influence on Scrooge. No warmth could warm, no wintry weather chill him. No wind that blew was bitterer than he, no falling snow was more intent upon its purpose, no pelting rain less open to entreaty. Foul weather didn’t know where to have him. The heaviest rain, and snow, and hail, and sleet, could boast of the advantage over him in only one respect. They often 'came down' handsomely, and Scrooge never did."

We see this also in the description of Scrooge's work environment of his counting-house:

"The door of Scrooge’s counting-house was open that he might keep his eye upon his clerk, who in a dismal little cell beyond, a sort of tank, was copying letters. Scrooge had a very small fire, but the clerk’s fire was so very much smaller that it looked like one coal. But he couldn’t replenish it, for Scrooge kept the coal-box in his own room; and so surely as the clerk came in with the shovel, the master predicted that it would be necessary for them to part. Wherefore the clerk put on his white comforter, and tried to warm himself at the candle; in which effort, not being a man of a strong imagination, he failed."

Finally, we also see this described about Scrooge's home:

"He lived in chambers which had once belonged to his deceased partner. They were a gloomy suite of rooms, in a lowering pile of building up a yard, where it had so little business to be, that one could scarcely help fancying it must have run there when it was a young house, playing at hide-and-seek with other houses, and forgotten the way out again. It was old enough now, and dreary enough, for nobody lived in it but Scrooge, the other rooms being all let out as offices. The yard was so dark that even Scrooge, who knew its every stone, was fain to grope with his hands. The fog and frost so hung about the black old gateway of the house, that it seemed as if the Genius of the Weather sat in mournful meditation on the threshold."

"Darkness is cheap, and Scrooge liked it."

"Quite satisfied, he closed his door, and locked himself in; double-locked himself in, which was not his custom. Thus secured against surprise, he took off his cravat; put on his dressing-gown and slippers, and his nightcap; and sat down before the fire to take his gruel.

It was a very low fire indeed; nothing on such a bitter night. He was obliged to sit close to it, and brood over it, before he could extract the least sensation of warmth from such a handful of fuel."

Thus Charles Dickens, with his vivid description of the external darkness and coldness that surrounded Ebenezer Scrooge on the night before Christmas, wants us to know that Scrooge was a heartless and greedy and depraved man, or as Dickens himself perfectly put it:

"Oh! But he was a tight-fisted hand at the grindstone, Scrooge! a squeezing, wrenching, grasping, scraping, clutching, covetous, old sinner! Hard and sharp as flint, from which no steel had ever struck out generous fire; secret, and self-contained, and solitary as an oyster."

Such descriptions make his conversion and redemption in the end all the more miraculous, all the brighter, all the warmer. Whereas his internal state once reflected his external environment in every aspect, in the end his internal state stands in contrast to the same environment, freeing him from its bondage and giving him the ability to change it.

Marilyn Manson has been known for years to prefer to live within an environment that is generally considered cold and dark. Numerous interviews refer to this. When interviewers describe this environment, they often do so to compare this to his vampire-like persona, especially when it is added that he prefers to stay awake all night and sleep during the day. No one has ever talked about this in a negative way, rather it added to the mystique and the atmosphere of his dangerous persona. That is, until recently. The recent allegations against Marilyn Manson have taken advantage of this darkness and coldness that surrounds him in his home/workplace environment. The court complaints read as if it was Dickens himself talking about Ebenezer Scrooge.

"Mr. Warner kept the apartment in near-total darkness and insisted that the temperature remain at 63 degrees Fahrenheit."

"Mr. Warner would berate Ms. Bianco... if she touched the thermostat."

"Warner slept most of the day, was often awake only at night and morning, and kept his apartment extremely dark (sometimes pitch black) and very cold. Plaintiff was often disoriented and unable to keep track of time because the windows were covered or blacked-out. She regularly had to use a flashlight inside the apartment. Despite the frigid temperature, Warner refused to allow plaintiff to wear clothing - demanding that she be nude - much of the time. He also became furious with her if she attempted to touch the thermostat."

"As Walters entered Defendant's residence, she was disoriented by the almost total darkness inside despite it still being light outside."

"Defendant maintained a peculiar and disorienting home and workplace. The interior of the home was covered in graffiti, blood and inappropriate phrases, all the furniture throughout the house/workplace was black, the carpet was black, and every window was covered with black curtains to prevent any outside light from entering the house/workplace. The rooms were kept dark with a few dimly lit lamps as the only source of light. As a result, Walters and other employees used flashlights and LED headlamps to find their way around the residence.

Employees were also not permitted to keep the temperature of the house/workplace above 65 degrees. If the temperature rose above 65 degrees, Defendant would explode in anger and screaming fits to the extent that he would break furniture and household items."
When you read these complaints, they sound almost exactly like how Dickens described Scrooge's treatment of his clerk Bob Cratchit, who was forced to work long hours in freezing temperatures, who would be scolded if he dared to put another piece of coal in the fireplace.
The reason the accusers bring up this darkness and coldness in Manson's house/workplace is because they want him to appear sinister and controlling like a cult leader. The external image of darkness and coldness by the accusers thus serves the same purpose, one could say a literary purpose, that Dickens used it for when describing the external environment of Scrooge, with the hope that it would also be seen, as with Scrooge, to reflect his internal state and character. Manson, they would have us believe, lives in darkness and coldness because he is in reality a dark and cold person, like Scrooge. In fact, he is in such a pathetic state of existence, that he has no redeeming value, unless some miracle took place, and he was haunted by four ghosts like Scrooge was, but the four ghosts in Manson's case are his four accusers who have all added these details in their accusations.

The four accusers want us to think that Manson is a Scrooge-like person, whose external home and workplace environment is a reflection of his internal character. In reality, it is a literary device which the reader can sympathize with, and thus a manipulative detail, nothing more, nothing less.