Is There Evidence Marilyn Manson Cut Himself 158 Times on Christmas of 2008? 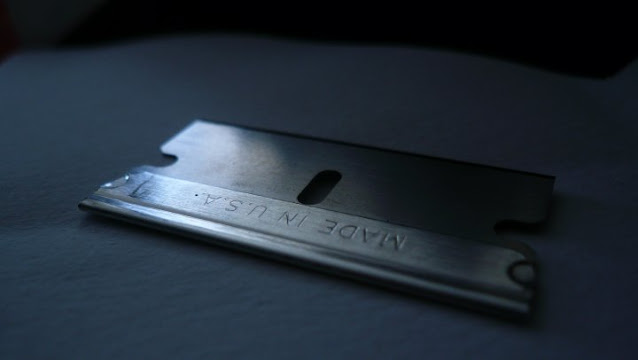 "My lowest point was Christmas Day 2008, because I didn’t speak to my family. My walls were covered in scrawlings of the lyrics and cocaine bags nailed to the wall. And I did have an experience where I was struggling to deal with being alone and being forsaken and being betrayed by putting your trust in one person, and making the mistake of that being the wrong person. And that’s a mistake that everyone can relate to. I made the mistake of trying to, desperately, grasp on and save that and own it. And every time I called her that day — I called 158 times — I took a razorblade and I cut myself on my face or on my hands. I look back and it was a really stupid thing to do. This was intentional, this was a scarification, and this was like a tattoo. I wanted to show her the pain she put me through. It was like, 'I want you to physically see what you’ve done.' It sounds made up but it’s completely true and I don’t give a shit if people believe it or not. I’ve got the scars to prove it."

This is what Marilyn Manson said in his notorious interview with Spin that was published on June 24, 2009 and would come to be perhaps his most quoted and controversial interview ever. One reason for this may be because the actress Patricia Arquette wrote on Twitter on March 1, 2018: "Marilyn Manson Cutting himself 158 x's when he called Evan Rachel Wood after breakup it's not ❤️ it's abuse.. @SPIN." The editor of The New Yorker, Amanda Guinzburg, replied: "Uh, he said in print he had fantasies every day abut smashing her head in with a sledgehammer. That's terrifying abuse." To this Patricia responded: "Yes but it's also abusive when your in a relationship with a stalking abusive partner. Let's see it for what it is & teach kids it's not ok."

This is the type of a moralistic perspective people have taken to these words of Manson, even though Manson said in the same interview that it was a stupid thing to do, but the media, from 2018 to 2021, who had just discovered this almost decade old interview, were reading it now in light of the then allegations of Evan Rachel Wood concerning an unnamed abuser from her past. 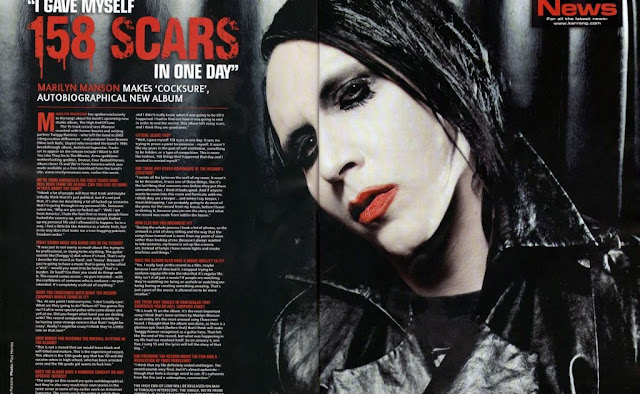 I remember buying this Spin issue back in 2009 specifically for the Manson interview, and when I read it, the first thing that came over me was skepticism. Being a long time fan of Manson, I've learned not to be a literalist when it comes to his words and lyrics and art in general. No doubt there was a certain truth behind it, emotionally, but how true was it exactly? Did Manson really cut himself 158 times on his face and hands? He calls it a scarification, he said he has the scars to prove it, so I kept my eyes open from that time forward to see if I could notice any scars on his face and hands that prove this is true. If those scars weren't there, then I knew he was trying to express something else through an extreme image. Fortunately, I never saw any proof of any physical scars.

I became a Manson fan just as the Antichrist Superstar era was coming to an end and the Mechanical Animals era was about to be announced within about six months or so. I had never heard of Marilyn Manson before this, nor had I heard any of his music. I was a college student living in a bubble those years, hardly ever watching television or listening to the radio. In fact, it was one of the darkest periods of my life when one day, in March of 1998, my girlfriend, another friend of mine, and myself were walking through a mall and passed by a Hot Topic, where a newly-released book called The Long Hard Road Out of Hell was widely displayed with over a hundred copies covering a wall. I was intrigued by the cover and the title, and when I looked in the cover-leaf I became instantly fascinated when I read: "Marilyn Manson has more than 450 scars, not counting emotional ones." That alone made me want to buy the book and find out more about this guy named Marilyn Manson who I never heard of.

In 1998 I was intrigued by Marilyn Manson's 450 scars, not including the emotional ones, and I felt instantly connected. Not once did I ever think to moralize what I just read. I wanted to know who this person was and why he had so many scars. Because on the inside at that time, I was feeling very scarred too, and it was something I was trying to figure out and deal with in my own way. For me, the book was the perfect therapy I needed, it was like a gift from God, I became an instant fan, and it wasn't till after I read it that I explored his music and videos and documentaries, and so on and so forth. Then the Mechanical Animals era came, and Manson was saying now that he found his soul, he was no longer living with this internal anger, that his scarring was all in the past never to be repeated, and that he even got surgery to remove what he could of his old scars. So when I was reading this interview in Spin more than ten years later, my thoughts of skepticism were informed by the fact that Manson said he would never do it again, and since I always understood it as a part of his showmanship, then if he is talking about it again now, in 2009, then it must also be a part of his showmanship, a theatrical display.

But the media and the Manson literalists insist that his words are exactly what they mean, and they are the confession of an abuser. If this is true, then they must have some evidence to prove this besides their literalist interpretation. This is what they present.

Laura from Manson Is Abusive on her Tumblr account presents the following three photos as proof that Manson literally scarred himself 158 times: 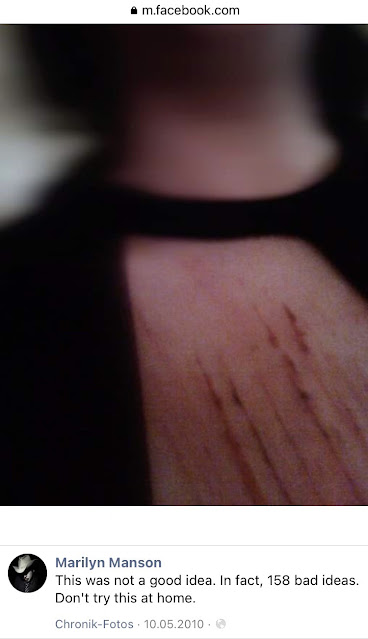 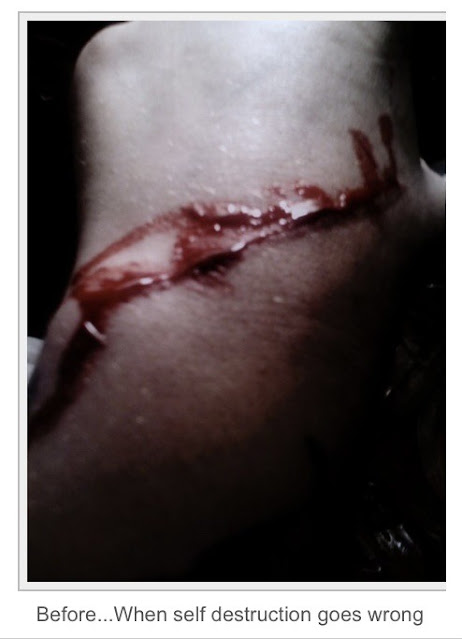 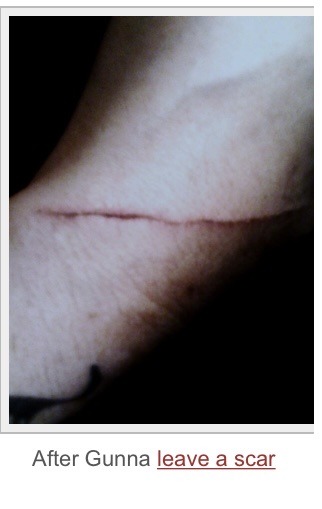 Marilyn Manson was new to Facebook when he posted these three photos on the same day, which was the 10th of May in 2010, and falls within the timeline of when Manson and Evan Rachel Wood were still engaged, but he was posting some random pictures that day to seemingly fill up his photo section (only the first of these photos is still there, as the other two were banned by Facebook and can no longer be seen). Manson himself indeed associates one of these photos, perhaps all three, with the 158 scars he talked about in June of 2009. However, we have a major discrepancy.

First, in the Spin interview, Manson specifically said he scarred his face and his hands. None of these photos show his face or his hands, instead they show his right chest and a wrist. For this reason alone I would say that even if these scars are real and date back to Christmas in 2008, they are not among the 158 scars mentioned by Manson, which he says specifically were on his face and hands.

Second, I personally believe these scars in all three of these photos pre-date Christmas of 2008. The main reason is because we know Manson got his "mad love" or "twisted heart" tattoo on his wrist before 2008, on the 14th of February 2007 specifically, and Manson said that if he ever slit his wrist he would do it over this tattoo to break the heart. The fact that the tattoo does not appear, nor any other tattoo, proves to me this is from before Christmas 2008.

Third, Manson has a few unfinished productions, whether it be music videos or films, where he just may have either used a make-up artist to scar himself or maybe even he scarred himself for real for the sake of the art piece, and these photos may be the result. One example of this is from the music video for "Saint", where Manson is shown to have scars on his chest over his heart. This seems a more likely possibility for the origins of these scars. Plus, if you notice the black shirt he is wearing in the first photo, it seems like it is designed to showcase these scars, which makes me believe they served a specific purpose.

Lastly, I think there actually may be some evidence that before Manson gets a particular tattoo, maybe even months in advance, he creates scars to enhance the effectiveness of the tattoo. I don't know for sure if this is true or not, but I have noticed a certain pattern with at least a few, and one of them I will even present below. The scars on the three photos above may have something to do with this.

Now that we can see the three photos presented as evidence are at least questionable, but most certainly not part of the 158 scars, then what other proof is there?

On the 6th of May 2015, Manson tweeted the following photo: 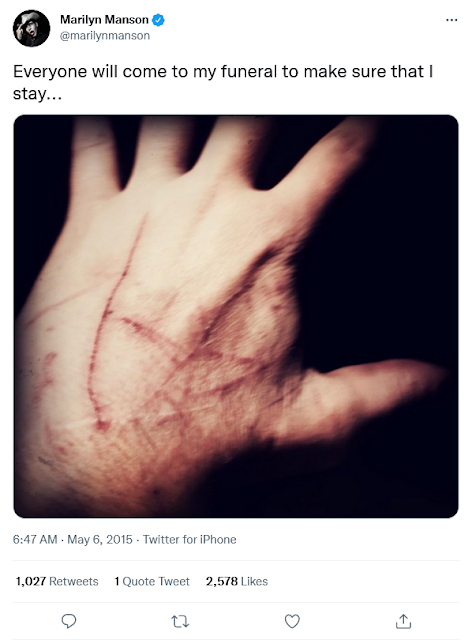 Thirteen fans started a petition soon after to get Manson to stop cutting himself.

On June 11th, at the Kerrang! Awards, the scars can still be seen. 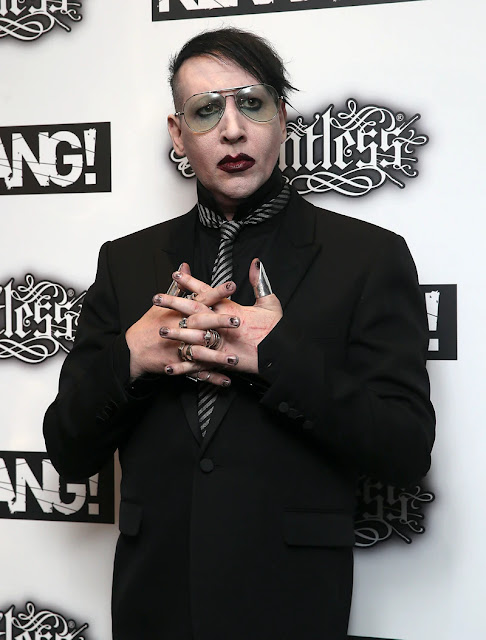 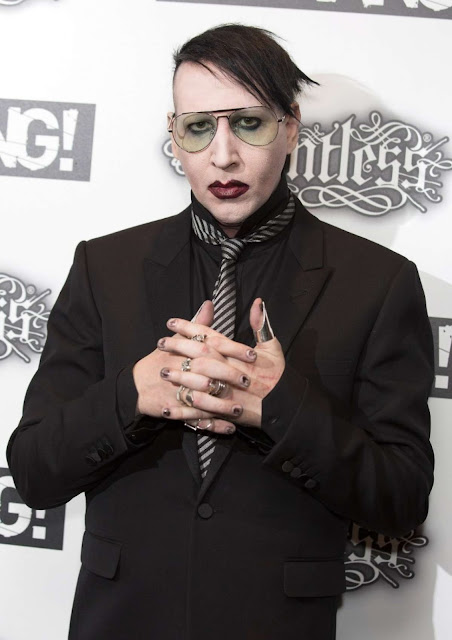 In late June, Manson was interviewed at Cannes in France, and Page Six issued the following headline: "Marilyn Manson reveals self-inflicted scars." The author of the piece, Emily Smith, associated these scars with the scars back in 2008, where Manson specifically said he scarred his hands. 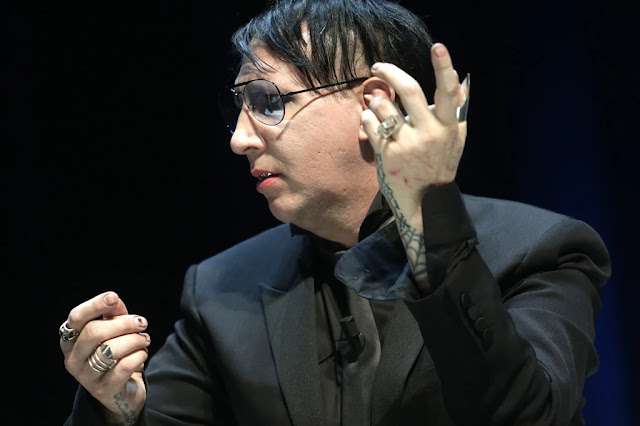 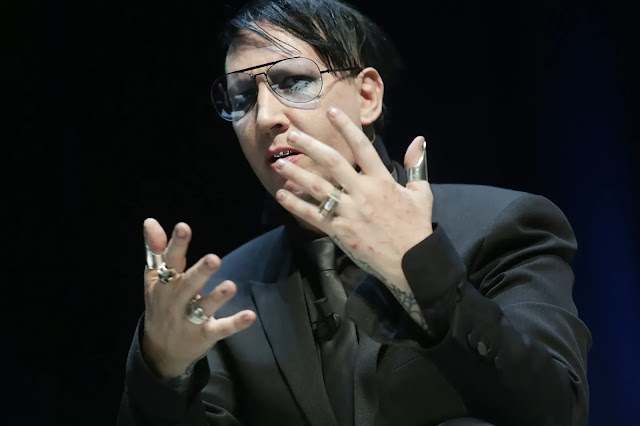 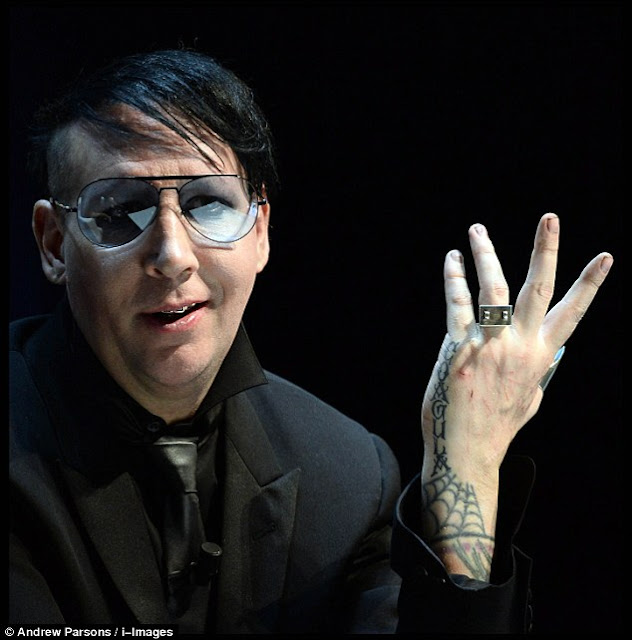 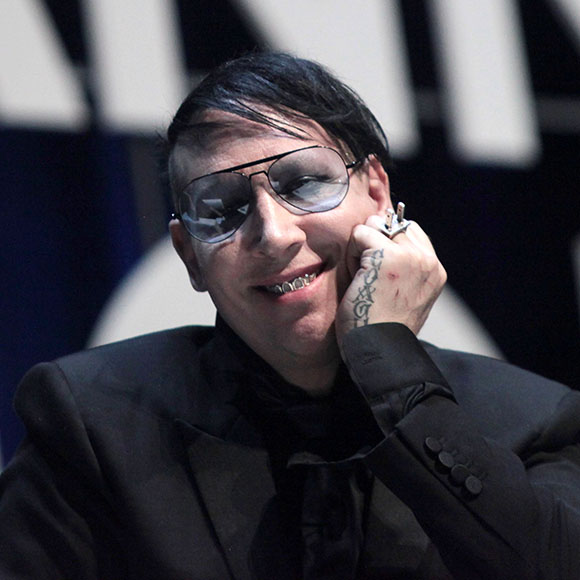 However, I have gone through hundreds of photos from 2008 to 2015, and before May of 2015 those scars can nowhere be seen. In fact, Manson's hands always looked very smooth, even after Christmas of 2008. Below is just one of many examples, from the 2014 Revolver Golden Gods Awards: 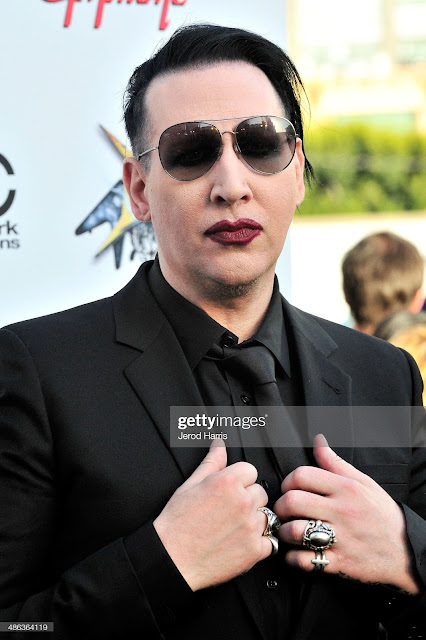 The scars still appeared at his show in the Concord Pavilion on August 13, 2016 in Concord, California. 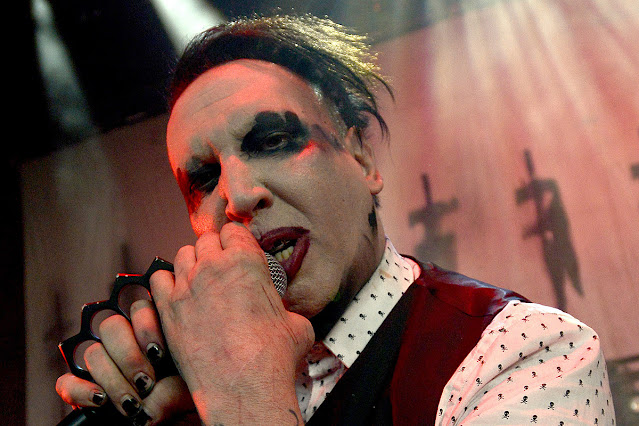 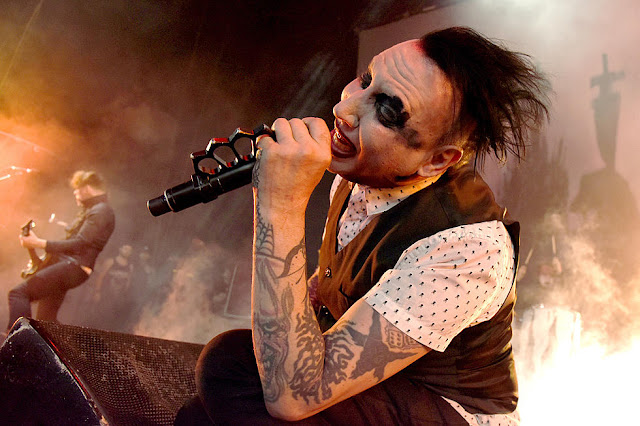 Then in June of 2017 it was revealed than Manson got a tattoo over those scars of the Sigil of Lucifer. 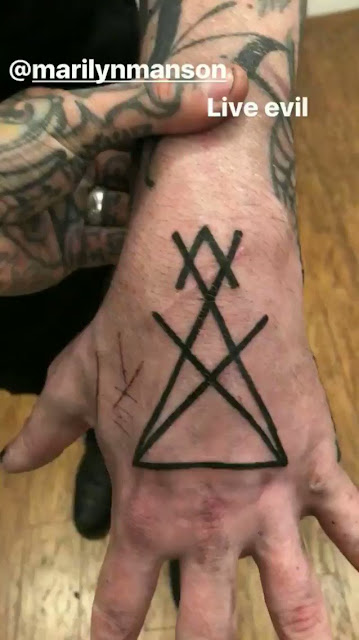 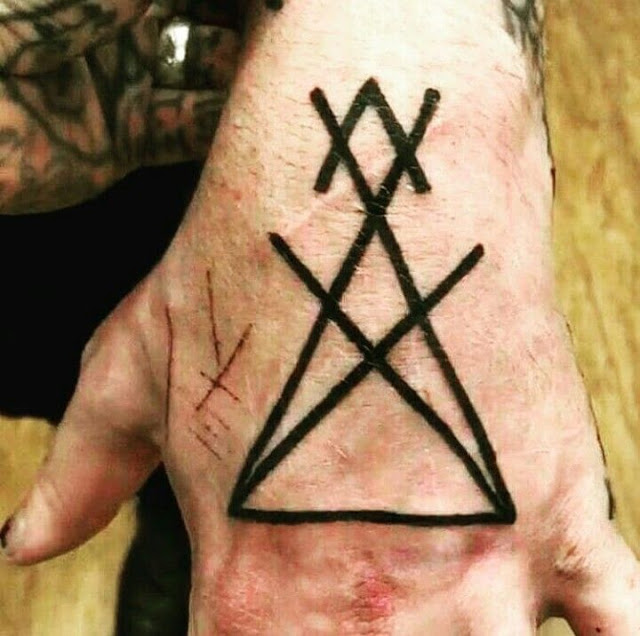 My conclusion is that there is no evidence to support Marilyn Manson literally scarred himself 158 times on Christmas in 2008 as he mourned the loss of Evan Rachel Wood. And logically it follows, if he did not scar himself 158 times that day, then he did not make 158 phone calls that day, since you can't have one without the other, and both depend on one another. In fact, Manson’s PR team in 2019 clarified that this in fact never happened, in a statement made to a hit piece issued by Metal Hammer against Manson at the time, in which the PR team said on behalf of Manson: "Your next couple of points deal with comments Manson made in Spin magazine in 2009. Your confusion around the timeline of this is extremely worrying. The comments in Spin where Manson had a fantasy of using a sledgehammer on Evan and he cut himself 158 times was obviously a theatrical rock star interview promoting a new record, and not a factual account. The fact that Evan and Manson got engaged six months after this interview would indicate that no one took this story literally."

Indeed, no one with a reasonable mind should take this account literally, especially when there is no proof for it.