When Patricia Arquette Called Out Marilyn Manson on March 1, 2018 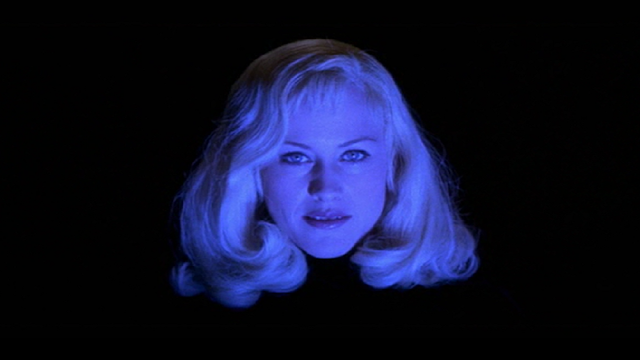 When Patricia Arquette won the best supporting actress statue for her role in Boyhood at the 2015 Oscars, she accepted her award with an empowering speech on women’s rights and equality. Since then, and especially after the rise of MeToo, she and her sister Rosanna Arquette have become very vocal activists on behalf of women and been very much criticized for targeting powerful white men, daily posting multiple tweets espousing left-wing liberalism and denouncing right-wing conservatism. In fact, Rosanna Arquette was one of the first women to come out against Harvey Weinstein in 2017 as a victim of his abuse, and all the way back in 2010, Rosanna Arquette became Goodwill Ambassador for The Womanity Foundation. With such a background, among many other similar things, it should be no surprise that it would be Patricia Arquette who would be the first to name Marilyn Manson as an abuser of Evan Rachel Wood. 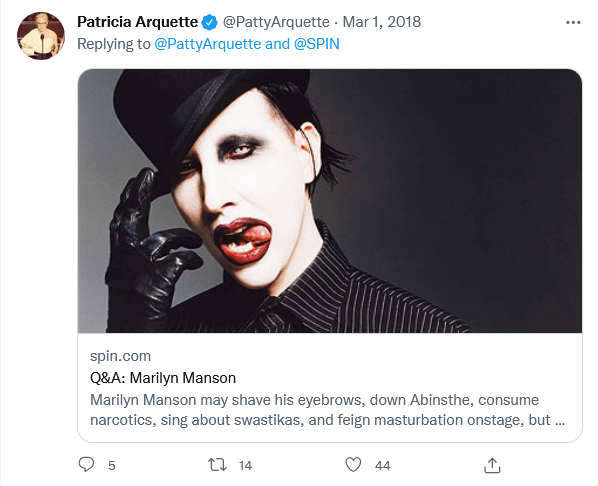 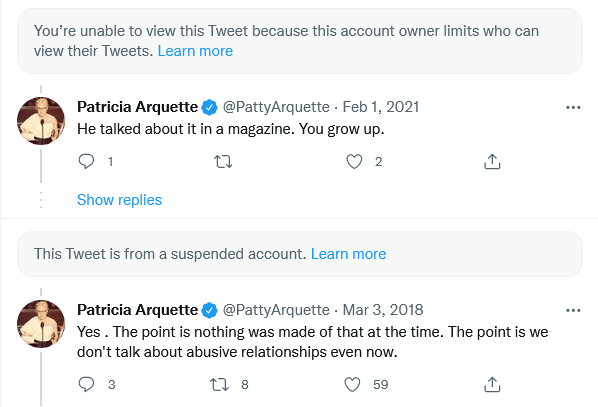 Patricia Arquette targeting Marilyn Manson as an abuser on March 1, 2018 must have been a major disappointment to him. After all, this is an actress who starred in True Romance (whose character name is "Alabama", which is an alias Evan Rachel Wood used in her exchanges with Illma Gore) and Lost Highway, two movies which inspired Manson as an artist, the former written by Quentin Tarantino and the latter by David Lynch, two men who have incorporated as acclaimed writers and directors extreme violence against women in their art. In fact, Manson and Twiggy Ramirez were in a scene with a nude Patricia Arquette as porn stars in Lost Highway, where she is seen drop-jawed at the size of Manson's penis before he is killed off in a snuff film. She was even married to his good friend Nicolas Cage, and starred alongside his other good friend Johnny Depp in Ed Wood.

The day after Patricia Arquette's tweet about Manson and Evan, Glamour published an article titled "Why Is Nobody Talking About Marilyn Manson's 'Fantasy' of Killing Evan Rachel Wood?" This was the first media article naming Marilyn Manson as Evan's abuser. It tries to explain why people at the time, in 2009, brushed off this statement, and further explains how now, in the MeToo era, these things need to be re-examined and explored. But do they? Maybe if someone has been proven guilty of crimes, but when this article came out, Evan hadn't even named Manson, nor had anyone else.
What prompted Patricia Arquette to call out Marilyn Manson on March 1, 2018? The answer is pretty easy to find if we recall what happened the day before, on February 28, 2018. This was the day Evan Rachel Wood gave her congressional testimony.
It appears Patricia Arquette, who keeps up with women's issues, followed this story closely and began to do some research as to who Evan was referring to.  Her research led her to Marilyn Manson as the abuser referred to by Evan, with a reference to the Spin interview with Manson in June 2009, where Manson says the following:
"And every time I called her [Evan Rachel Wood] that day — I called 158 times — I took a razorblade and I cut myself on my face or on my hands... I have fantasies every day about smashing her skull in with a sledgehammer."
Ironically, or maybe purposefully, on the night of February 28, 2018, Marilyn Manson posted the following message and image on Twitter:

Oh. The fun that is to come. I love when “they” wanna play F&G. pic.twitter.com/2fvmesBOpu

Even though this is dated March 1st for some reason, it was actually posted at 7:53pm on February 28th. "F&G" I believe refers to "Fun and Games", but I'm not sure who "they" refers to. Possibly Evan Rachel Wood, possibly completely unrelated to Evan Rachel Wood. In fact, what Manson writes reminds me of the quote from Dr. Seuss', Oh, The Places You’ll Go!: "Oh the places you'll go! There is fun to be done! There are points to be scored. There are games to be won." But the ironic thing about it all is that Manson is shown in the gif smashing down on something with an axe/sledgehammer, or more specifically a splitting maul. No doubt Patricia Arquette saw Manson's tweet before she made her own tweet after seeing Evan's Congressional testimony, and viewed it in light of the Spin interview from 2009.
The odd thing about Patricia Arquette's tweet is that it is about an interview from nine years earlier, and she is linking Spin to the tweet but not Marilyn Manson or Evan Rachel Wood. Is she calling out Spin for this interview and not calling out Manson at the time? That's what it looks like to me. 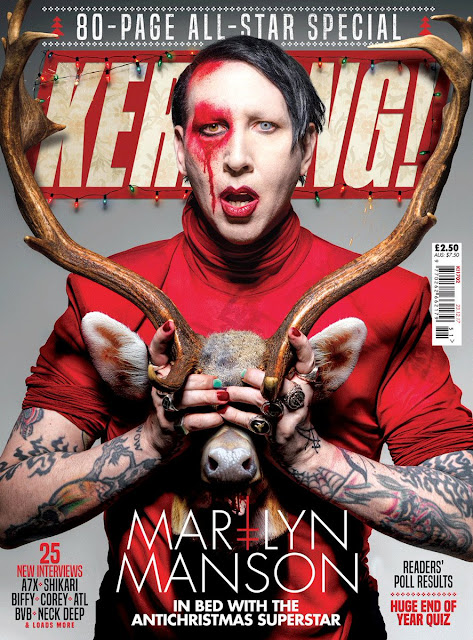 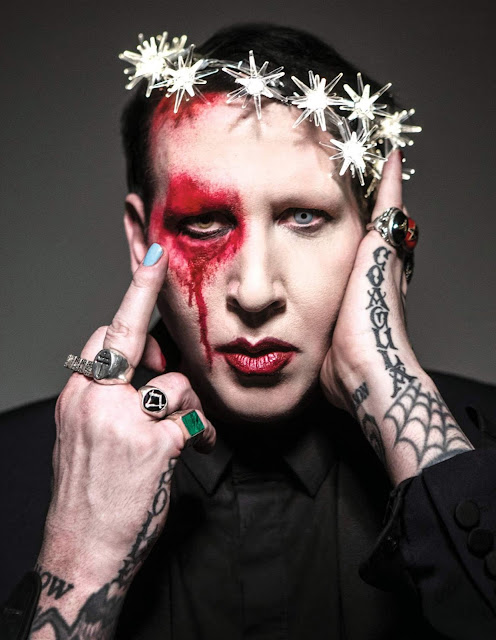 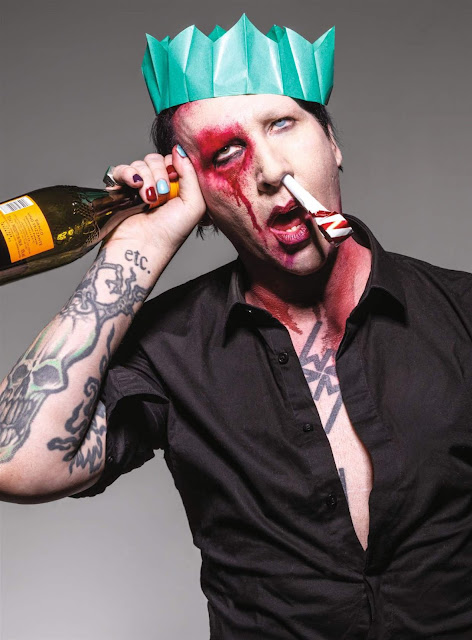 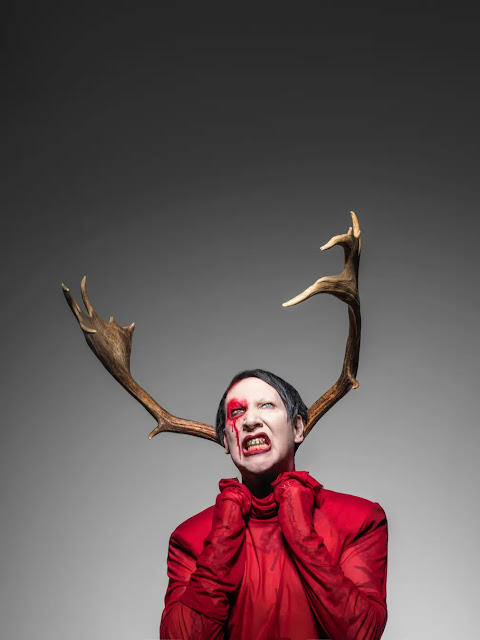 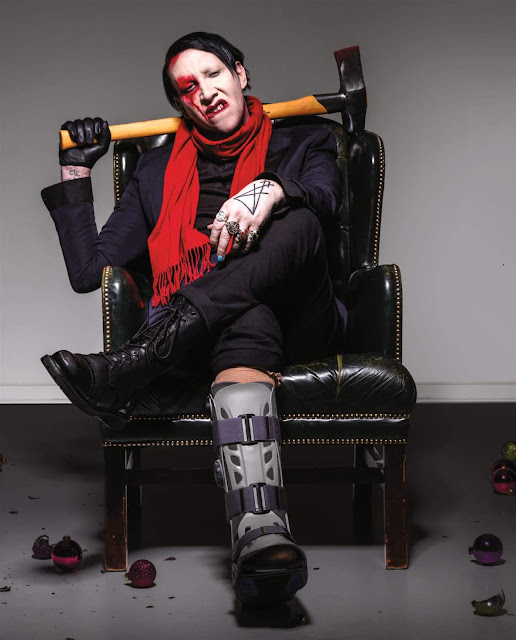 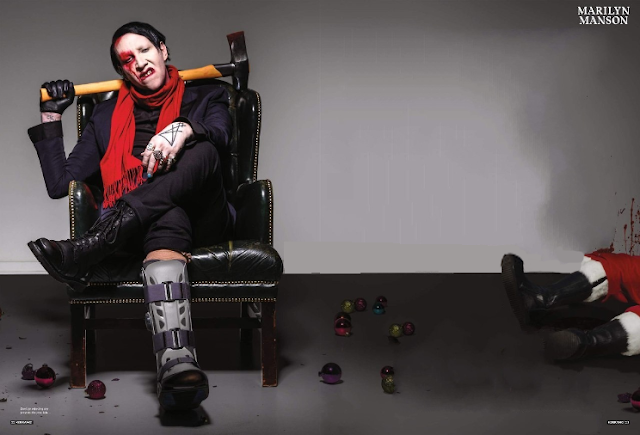