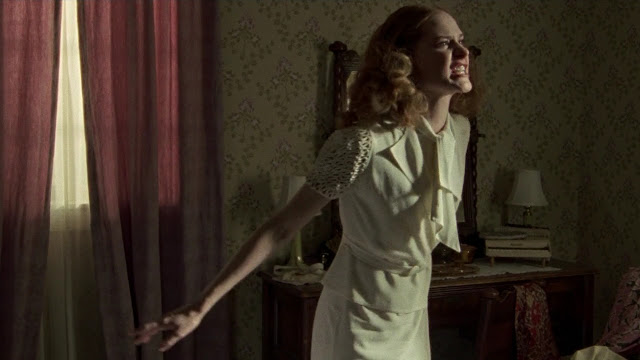 Today the Daily Beast published a news story titled "Marilyn Manson’s Treatment of Evan Rachel Wood Troubled HBO", offering us some new information about the time Marilyn Manson visited Evan Rachel Wood on the set of the HBO mini-series Mildred Pierce. Unsurprisingly this was written by Cheyenne Roundtree, who previously worked for another tabloid journal the Daily Mail, and has a penchant for reporting on these kind of stories with a biased twist. And she takes the opportunity to take a hit at Manson by covering some key information released in a new book titled Tinderbox: HBO's Ruthless Pursuit of New Frontiers.

In this book, Emmy Award-winning producer Ilene Landress, who in addition to Mildred Pierce worked on The Sopranos and Girls, is quoted saying:

"I would believe every single thing Evan has said about Marilyn Manson, because we were there. He came to visit once, and I remember the vodka bottle flying out of the trailer. She would come to work in bad shape. She would come to work like the train had run her over… Pretty much every morning if I saw Evan Rachel Wood, the first question would be, ‘Where’s the medic?’ She was in a rough place."

Landress further adds that what was going on in Wood’s personal life “never compromised her performance” on the show. “She would just fall asleep in the makeup chair, pop out of the makeup chair, and do her thing.”

In the same book, Evan herself says she was in "a very dark place" while filming (Cheyenne Roundtree misleadingly says Evan was "in 'a very dark place' during the period they were engaged). "Everyone was going through some sort of intense, personal trauma or tribulation at the time,” she added, referencing co-star Kate Winslet’s divorce from British director Sam Mendes and the sudden death of Winslet’s mother.

Cheyenne Roundtree of the Daily Beast puts the context of the above quotes within the alleged abusive relationship between Manson and Evan. Evan reposted this article in her Instagram Story today, with the additional words:

"I almost cried reading this. Its all true. It was one of the hardest times of my life and I knew Ilene knew but I couldn't talk about it yet. The producers of Mildred Pierce and HBO did what they could to help me, but I was deep in it at that time. Thank you for speaking out Ilene!" 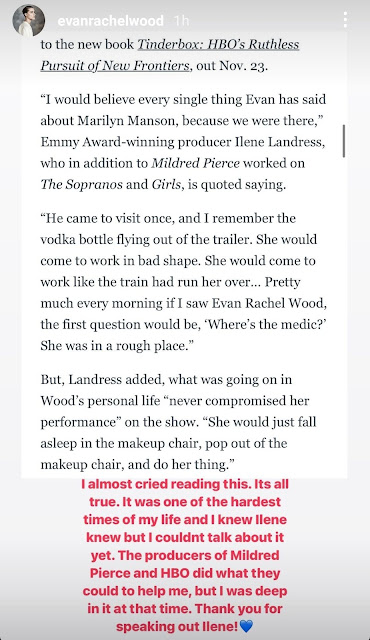 But what was it really like when Marilyn Manson visited the set of Mildred Pierce?

Mildred Pierce began filming in April of 2010 in New York. We are informed through reports that after Evan filmed some scenes with Kate Winslet on Thursday, May 27th, Manson came to spend the day with Evan on her day off on Friday, May 28th. Photos were taken of the two taking a stroll together hand in hand in the Lower East Side, and Evan looks happy with a smile, wearing her signature Lolita glasses she prefers to wear when with Manson, and they even match with their black and pink outfits. That night they were captured in photos chatting with Guy Pearce and a friend of Manson from New York, Nick Kushner. It is not known how long Manson was there, but from the reports it seems he was there no longer than a day or possibly two.

The facts tell us Ilene Landress is either lieing or jumping to conclusions, but she certainly is not reporting the truth.

Landress reveals she has an ulterior motive when she begins by saying that she believes everything Evan says, because she saw a vodka bottle being thrown from Evan's trailer while Manson was there and because Evan would appear on set looking like she needed a medic. What Landress is therefore suggesting and implying is that Manson was physically and mentally and emotionally abusive towards Evan, to the point where she looked like she needed a medic, while filming Mildred Pierce.

The truth, beyond this obvious fabrication of Landress, is as follows:

1. Manson was never on the set of Mildred Pierce while Evan was filming. It doesn't even make sense for Manson to be there while she was filming, since he has a busy life in Los Angeles and it would only be a waste of time waiting for her for the hours it takes to film. This is why he visited her during her time off. And even if he did visit her while filming, would he really physically abuse her with other people around, and knowing that she was going to be having her makeup done and filming revealing scenes?

2. According to Manson's former assistant, Paula Baby, he didn't begin to drink vodka until at least 2013, and in 2015 Rolling Stone reported that vodka was something new that Manson began drinking. How does Landress know it wasn't Evan who threw the vodka bottle, or one of Manson's friends visiting, or even another cast member? Why does it need to be used in the context of abuse? Maybe Manson saw the vodka and tossed it because he didn't drink it at the time. Plus, isn't it unprofessional if Evan was drinking while filming?
As a possible solution to this mystery, in the April 7, 2011 article from New York Magazine titled  "Daughter Dearest", which is about the filming of Mildred Pierce, it says that Evan and Guy Pearce shared the same trailer, and could hear each other through a thin barrier. I also learned that Pearce had an alcohol problem, with his drink of choice being vodka and pink lemonade. This helps to explain two things: 1) Guy Pearce possibly threw the vodka bottle, and 2) Manson was unlikely abusive to Evan in the trailer with Guy Pearce there.
3. Evan has a full nude scene, her first, in Mildred Pierce, and it is clear for everyone to see that she has nothing on her body that looks like she endured a beating to the point of needing a medic. 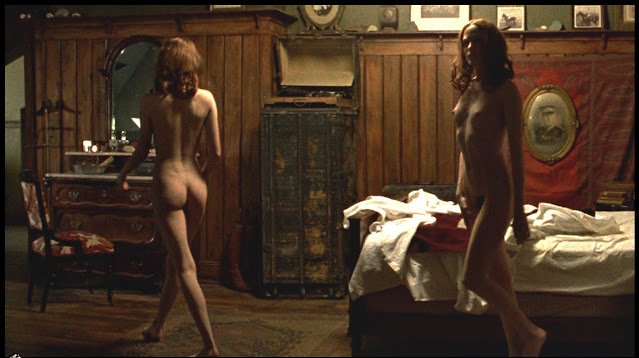 4. If Landress understood that Evan was being abused by Manson to the point of needing a medic, then why didn't she or anyone else report it, or at least try and help Evan by insisting on medical care, or even kicking Manson off the set?

5. In interviews while filming Mildred Pierce, Evan makes it clear that she was in a "very dark place" not because of her "abusive" relationship with Manson, but because she was playing a psychopath that required her to go to dark places mentally, and it was hard to balance it out, leading her to go into dark places in her personal life. The interviews below are a good summary of this:

6. The director and main producer of Mildred Pierce, Todd Haynes, tells us what should be considered closer to the truth about what was really going on with Evan, in an interview with New York Magazine on April 17, 2011. He says that Evan had to appear on set the day after she and Manson broke off their engagement. According to New York Magazine:

"The morning after that breakup, Wood went in to work on Mildred Pierce, then shooting on Long Island. She immediately broke the news to her director, Todd Haynes, who could see that she was having a tough time. 'I know that they had really tried to make a go of that relationship,' he says, 'and yet she brought this incredible calmness and focus to the set regardless of what was happening. Ed Lachman—the D.P.—and I would sit back in awe at how she photographs. There’s something beyond just her physical presence that the camera just adores. It’s incandescent.'

That particular day, she had to perform a scene in which her character, Veda Pierce, has her dreams of piano-prodigy stardom smashed; she then throws what Haynes calls 'a classic teenage tantrum' at her mother, played by Winslet. 'It was really hard,' says Wood. 'Being in her head space that whole time messes with you. Kate helped with that. She said, "You’ve got to rise above it, you’ve got to rise above it." Luckily Veda’s a pretty dark character, so I didn’t have to come in and shine.'"

It seems that the filming in Long Island was done in June, according to online sources, which may confirm speculations that Manson and Evan ended their relationship in June of 2010 and not as many assume August of 2010, or at least the breakup began in June. This also tells us that the breakup may have taken place while Manson was in Los Angeles and Evan was in New York.

Todd Haynes therefore confirms for us that Manson and Evan were not in a horrible relationship Evan was trying to escape from, but in a good relationship they were trying to make work, and when the relationship ended her dejection manifested on set and she expressed her feelings through her dark character.

Between Evan portraying a difficult character in Mildred Pierce and having to go to a dark place to do so, which affected her personal life, and having to endure the breakup of her engagement with Marilyn Manson while filming these difficult scenes, it would sufficiently explain why Evan was observed the way she was by her producer, Ilene Landress. However, this is no excuse for Landress to exaggerate and make accusations that this was because she was being abused, when in fact she reveals by what she said that she had no idea what was really going on, despite making herself into an eyewitness. In fact, it really reveals she is lieing, and Evan of course is feeding in to the lie to further her narrative. 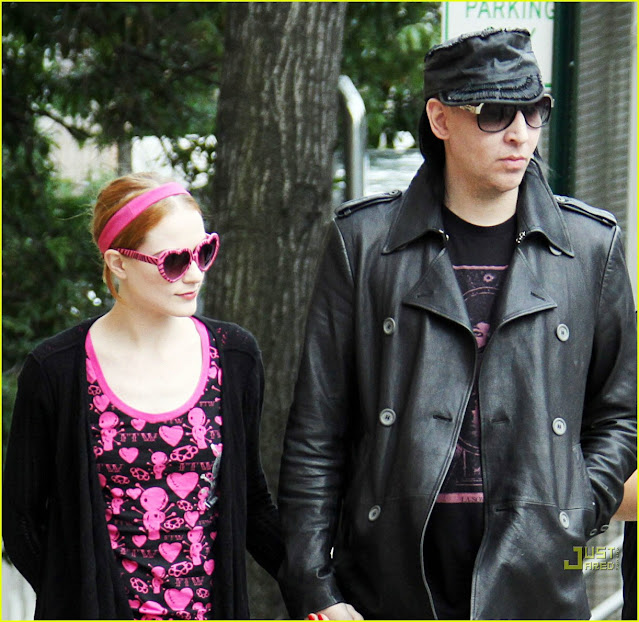 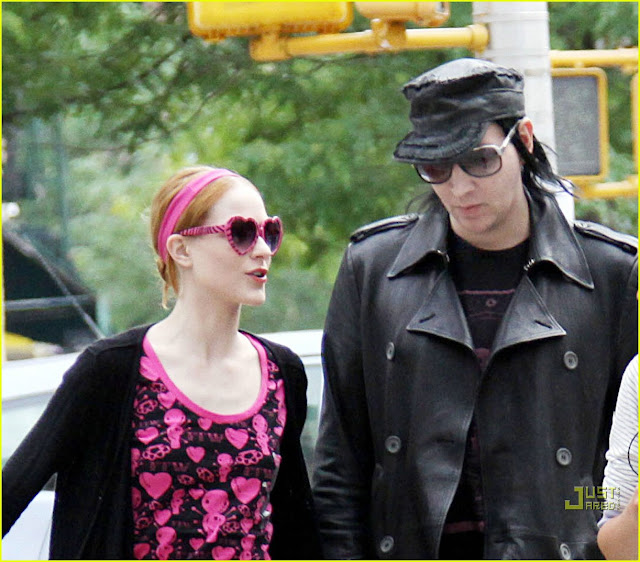 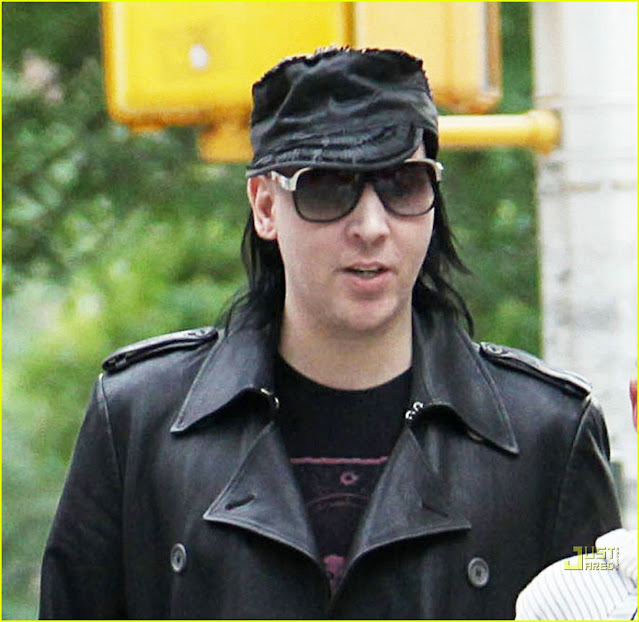 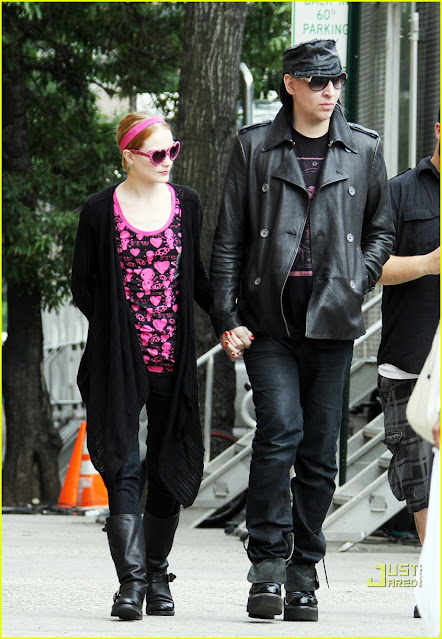 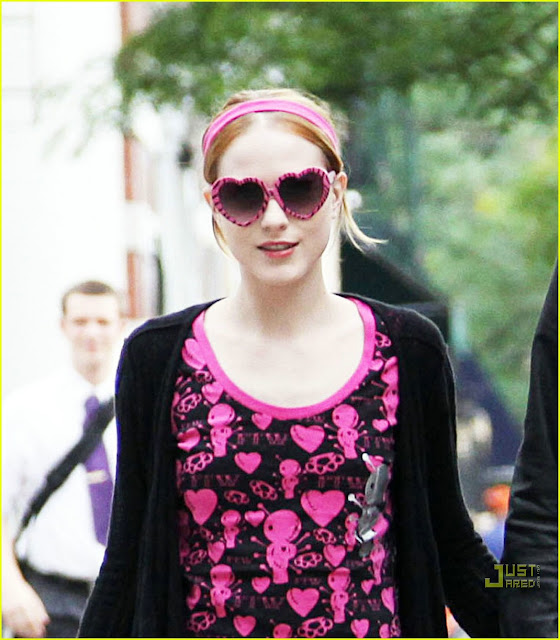 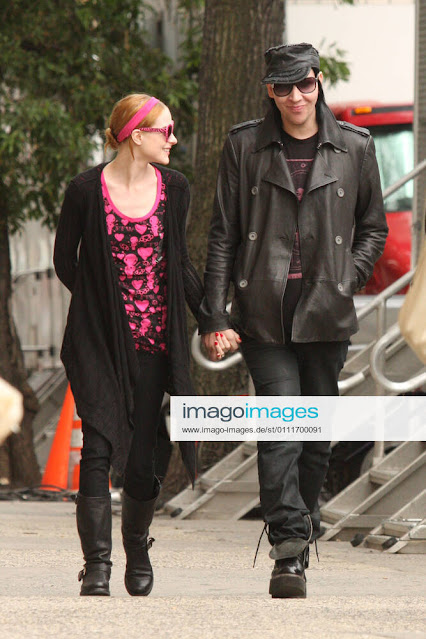 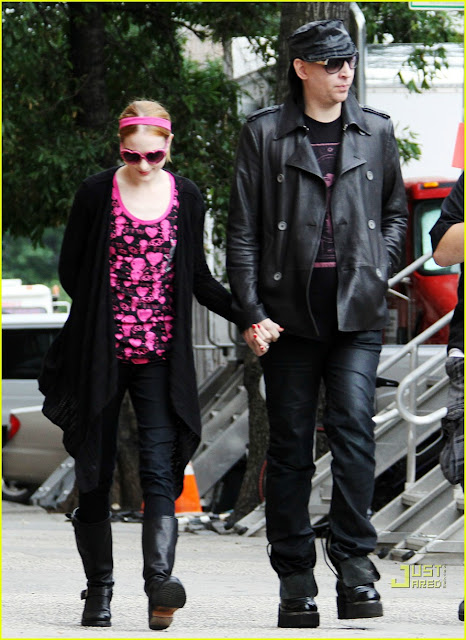 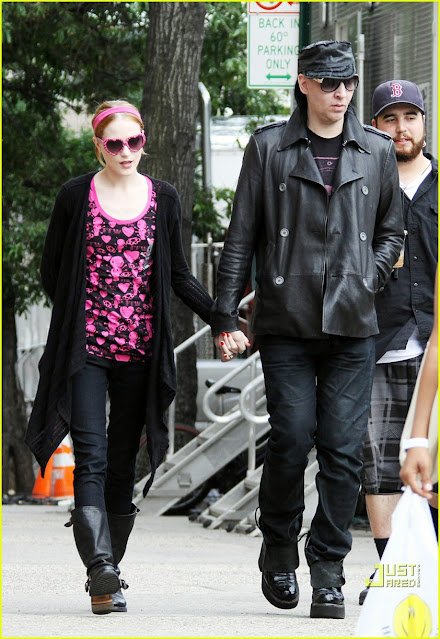 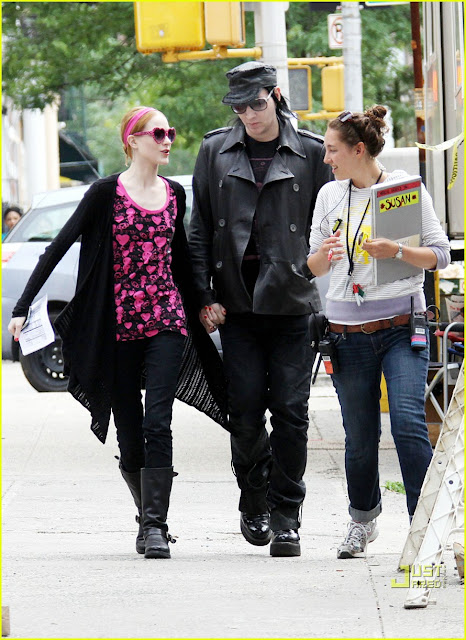 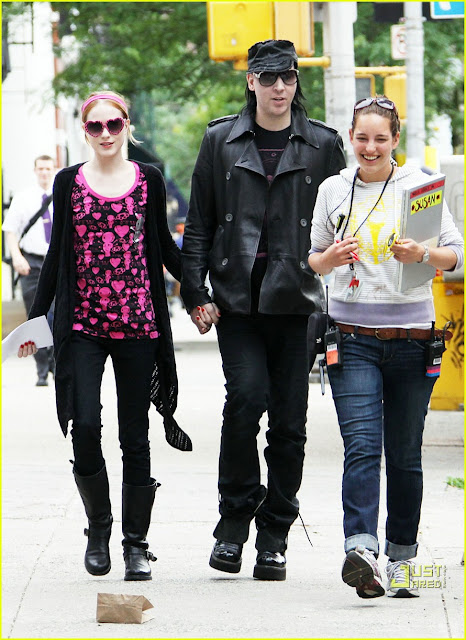 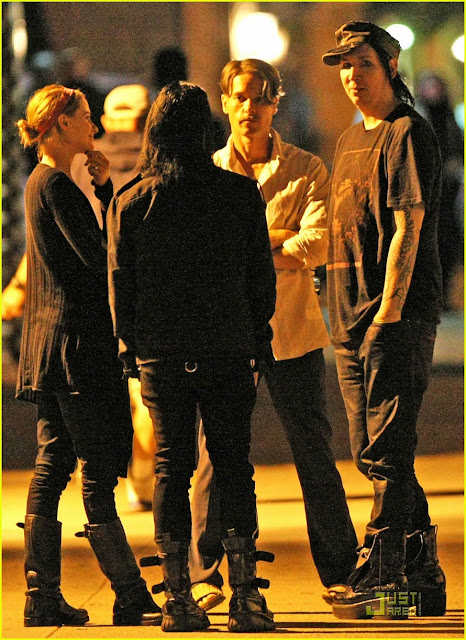 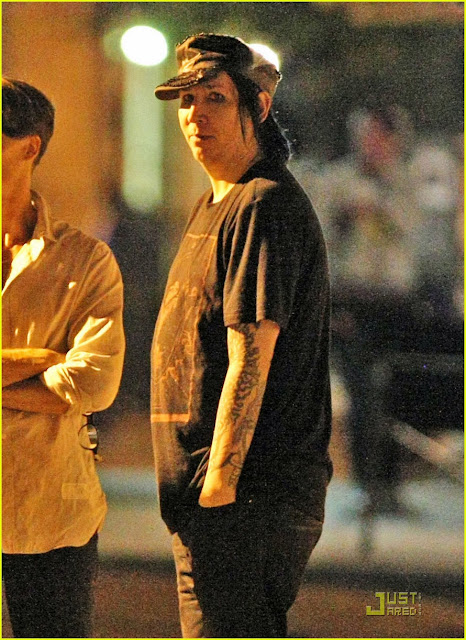 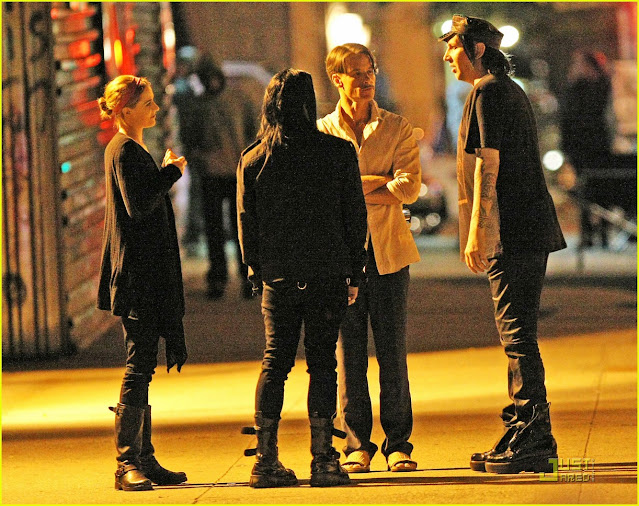 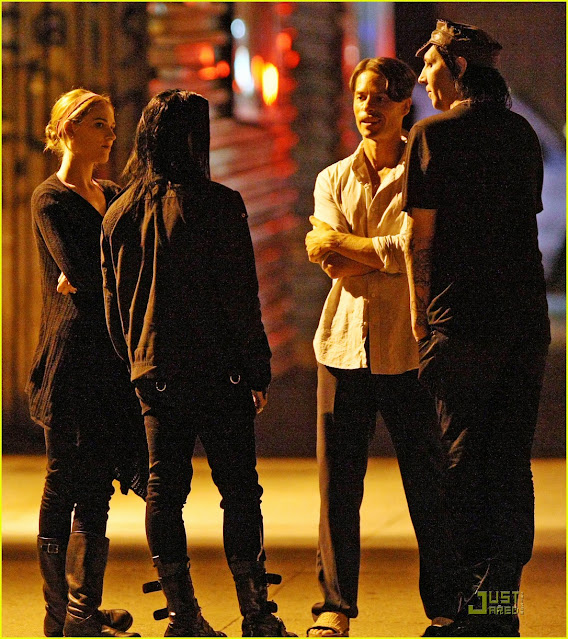 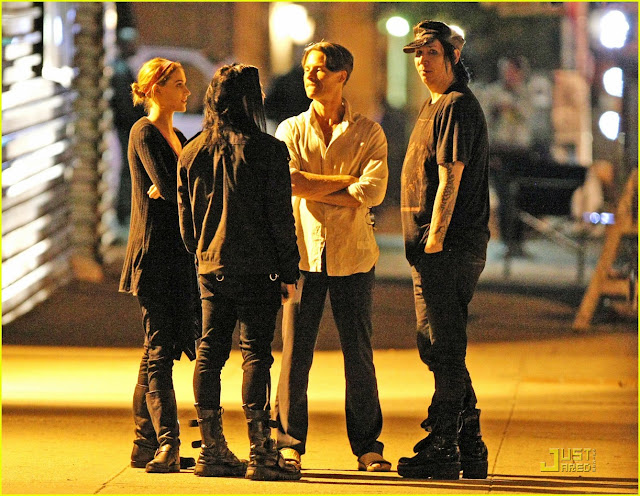 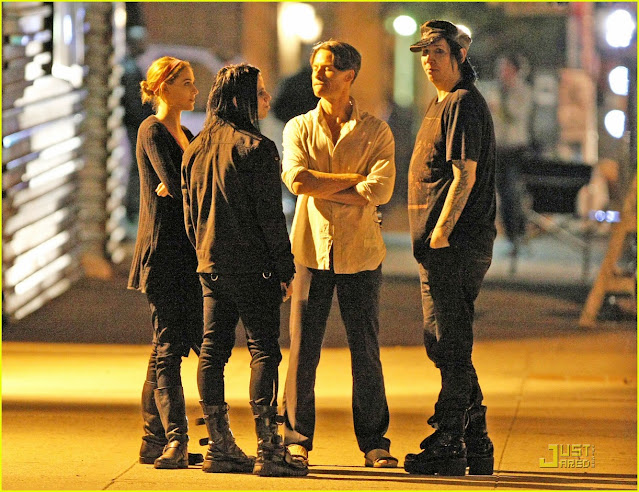 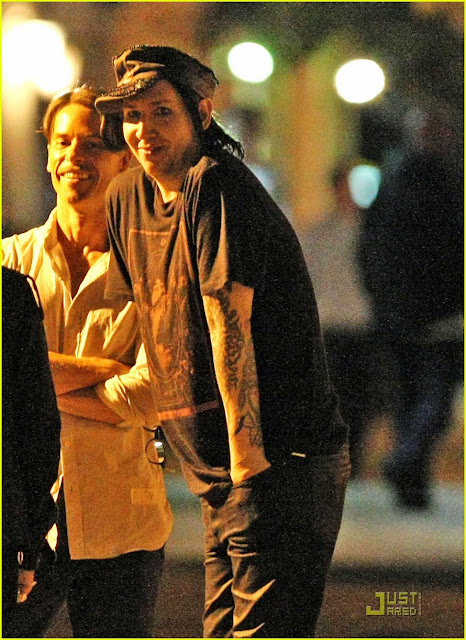 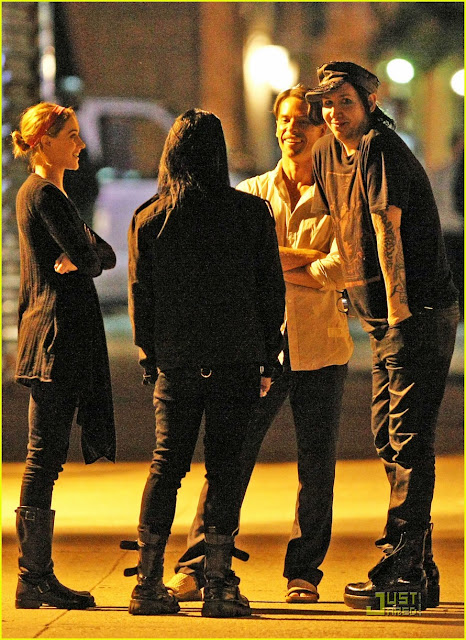