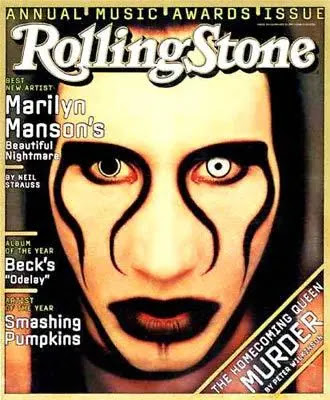 At one time it was the goal of everyone in rock music to be featured on the cover of Rolling Stone magazine. Dr. Hook & the Medicine Show wrote a popular song about it. This song was one of Marilyn Manson's favorite and most inspiring songs during his rise to rock stardom in the 1990's, a featured hit on his tour bus at the time until he finally did land the cover in 1997, at the news of which he and fellow bandmate Twiggy Ramirez broke out in a rendition. Today, alas! it should be considered an embarrassment to have anything to do with Rolling Stone.
On November 14, 2021, Rolling Stone published an article titled "Marilyn Manson: The Monster Hiding in Plain Sight". The authors, Kory Grow and Jason Newman, claim this article took nine months to investigate and write, after conducting 55 new interviews. You would expect such an investigation to produce an objective journalistic masterpiece. The promotion was all hype, however. The fact of the matter is, from the very beginning Rolling Stone conducted a very short-sighted investigation, and it had one specific agenda - find all the information you can that could possibly hint that Marilyn Manson is guilty of rape and abuse, and ignore everything else that presents a different narrative. This can be clearly seen when reading through the whole tiresome, long-winded and redundant article, which is shown to be nothing more than a pathetic propaganda hit piece against Marilyn Manson. 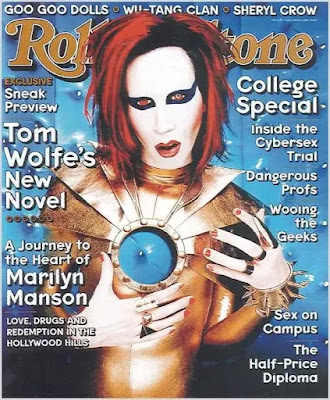 Rolling Stone has long been rolling downhill, and it's stone no longer exists, having been disintegrated into sand. This is not news to Rolling Stone. They know what is going on with their company. They've been sued so many times for their horrible journalism and third-rate stories, some of which are rape cases that never were a reality, that in 2017 they had to switch ownership and pay a very hefty fine. This was because they falsely-sourced a story about a fraternity rape at the University of Virginia. A fairly recent book, Sticky Fingers: The Life and Times of Jann Wenner and Rolling Stone Magazine, documents the rise and fall of Rolling Stone, which is nothing more than a moneymaking machine that doesn't care about truth or journalism. In January of 2021 their desperation for money and low level of journalistic integrity was seen when they offered a "culture council" of online influencers to pay $2,000 to write an article for their website, though you had to be vetted, since they don't want anyone contradicting or deviating from their established narrative on a particular subject. It's become so bad over at Rolling Stone, that it seems every new issue becomes a source of self-humiliation, and as Kyle Smith of National Review wrote of Rolling Stone, "it's a wonder the place doesn't shut its doors immediately, liquidate all assets, and deny that it ever existed."

Furthermore, Rolling Stone articles have long held a far left liberal slant without any deviation, which is why it is a favorite amongst radicalized liberals, which all the Manson accusers happen to be, especially the Rolling Stone-darling Evan Rachel Wood, who gave Rolling Stone the exclusive story of her rape in November of 2016. Conservative columnist Jonah Goldberg stated that Rolling Stone had "essentially become the house organ of the Democratic National Committee". Rolling Stone editor Jann Wenner has made all of his political donations to Democrats. Rolling Stone itself endorsed Democratic candidate Hillary Clinton in the run-up for the 2016 U.S. presidential election. These days, its bread and butter is to write propaganda pieces hailing liberal ideals and movements, such as the Me Too movement, and running hit pieces against anything and anyone that doesn't live up to those ideals, like Marilyn Manson, but especially Donald Trump, whom they almost daily jab with their venom. Just read some of their recent headlines about Trump, and you will see clearly this is a publication with an agenda, and it hates Trump more than anyone. For example, here are five titles from the past year that demonstrate Rolling Stone has no desire to be objective about Donald Trump, and shameless articles like this come up about Trump almost daily to this day even though he is not in office:

Trump Proudly Announces New Plan to Con Supporters Out of Their Money (Aug 5, 2021)

Trump Takes Nation on One Last Excruciating, Delusional Tour of His Presidency (Jan 19, 2021) 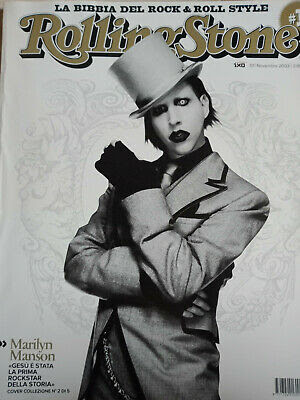 Then we have two miserable men who hold the embarrassing title of being employed by Rolling Stone, Kory Grow and Jason Newman. Let's do some quick investigative journalism on them. Kory Grow from Colorodo Springs, now living in Astoria, joined Rolling Stone's staff in 2014 and reports on music, movies, TV and culture. This means he has only worked for Rolling Stone as long as it's been on a very fast-moving downward spiral, and I'm sure he did much to contribute to its downfall. His Twitter account is set to private, which probably means something sinister; who knows what kind of a sexual deviant he is that he feels the need to hide his profile from the public. He has 996 photos on Instagram, and not one of them appears to be decent enough for public viewing. I did find out his middle name is "McCracken", which is enough to make his character questionable, and he was even able to convince someone to marry him in 2011 despite his not-so-good looks. He even wrote a book on heavy metal music, but the lack of reviews on Amazon seem to show it wasn't quite the best-seller. Some even call him a journalist, which is really shocking after reading this piece on Marilyn Manson. Jason Newman is the News Director at Rolling Stone since 2015, another one who contributed to the fall of this publication. His Twitter account is at least open to the public, but very boring, which probably means his deviant behavior is more discreet while his public persona is professional.

The paragraph above is something I wrote in 5 minutes, after doing a total of 5 minutes of research on both of these shady "journalists", but I gave it a bit of a spin in order to show what kind of "journalism" Rolling Stone is all about, while at the same time protecting myself by using words like "probably", "appears" and "seem". It is a journalism that is very compelling, but has little to do with the truth. 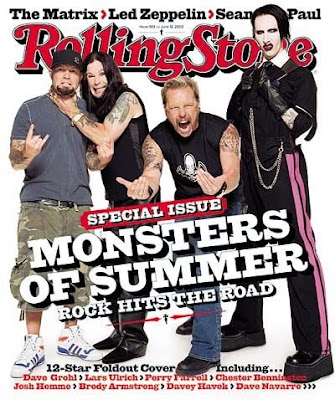 It's interesting that this hit piece on Marilyn Manson, which took nine months to "investigate", was published less than two weeks after a very similar hit piece was published by Business Insider against Dave Portnoy of Barstool Sports. In the latter hit piece, Business Insider did an eight month "investigation" on Portnoy, with their only objective being to find dirt on him in order to bring him and his empire down. They contacted every female even remotely associated with him and tried to find out if he did anything sexually deviant with them or made some sort of advancement against their will. After contacting dozens of females, they found two who made Dave seem like an abusive rapist. Not being one to listen to his lawyers and stay quiet till it all blows over, Dave Portnoy immediately took his case public on social media, and proved without a doubt that Business Insider was solely looking to destroy him, no matter how long it took, and the two women that accused him he proved to be frauds through his communication with them which he saved.

Rape and sexual abuse stories of any kind from a famous public figure are big business for journalists, attracting multiple headlines and website clicks. And it is fairly easy to write about, as long as you cover the other side of the story just enough that you won't get sued by them, where the journalist can argue that he heard both sides and cited both sides in a story instead of it just being one-sided. All they have to really write is that they attempted to contact the one being accused, who they know won't talk for legal reasons, and this exonerates them and allows them to gloat in their objective attempt at real journalism. But the other side of the story, which is the story they don't really want to cover but do so only to cover their asses legally, and that at an absolute minimum, you will never hear it if the journalist doesn't want you to hear it, and usually they do everything they can to prevent you from hearing it. The side they do want to cover they will provide ample space for, but never question. 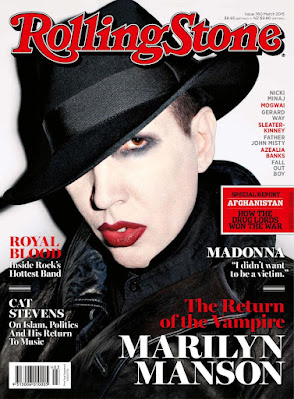 Let's take this Manson story published by Rolling Stone as an example. Musician Tim Skold, a close friend of Manson who supports him in the article, gets an insignificant sentence in the whole long article, and this is the guy who has been hanging out with Manson regularly over the past month or so. According to Skold on his Instagram account today, he was interviewed for a half an hour only to get one single line in the Rolling Stone piece, but this did not surprise him much, because he has been a full-time successful musician for over 30 years and this was the only time in all that time he has even been mentioned by Rolling Stone. Another Manson supporter and former girlfriend, Pola Weiss, whom accusers of Manson said was killed on video at the hands of Manson, also only got one line in the whole article, despite being interviewed for a few hours by a very polite woman (?), but who Pola said was only interested in hearing about rape jokes that Manson may have said or anything else about rape. It's the same story with every Manson supporter contacted by Rolling Stone. They knew they had to contact these people in order to properly call what they were doing an investigation, but their only interest was to use them to cover their asses so they won't get sued like they have for other stories like this they have covered under false pretenses.

In part two I will go through each paragraph in the article by Rolling Stone (actually, there were two of articles on the same day), and will separate fact from fiction.