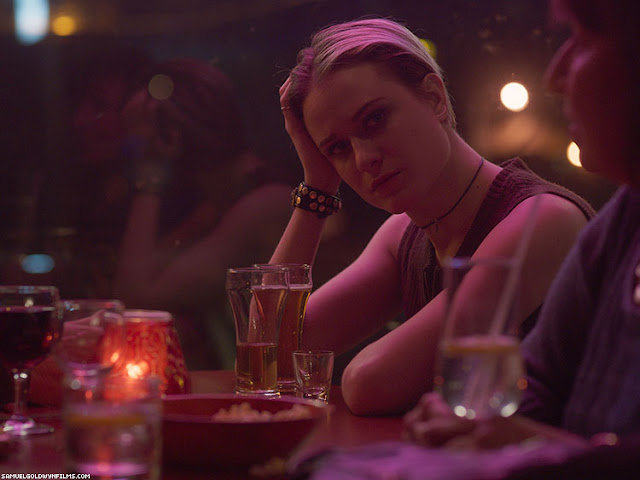 As Evan Rachel Wood is in Raleigh, North Carolina practicing for her upcoming theatrical role in a few weeks in the Theater in the Park production of The Father, in which she will star alongside her real father, Ira David Wood III, and be directed by her brother, Ira David Wood IV; and after having come off of a successful promotional campaign for the season four premier of Westworld, it appears she is in the middle of a meltdown. Why? Because things are not going her way in the media, among other things, and for those who know about Evan Rachel Wood, when things don't go her way, she has a meltdown, and not just an emotional meltdown, but a self-destructive meltdown. After all, one of the motivating factors she targeted Marilyn Manson in the first place with false allegations was because she was trying to assume control over her own media narrative, which included expunging the bad coverage of the past.

Let's see how this meltdown happened. To make it simple, I will summarize it through three articles Newsweek put out over the past couple of days. I will provide links, so you can read the articles and see how this developed.

Bot Sentinal issued a very one-sided, biased report that identified and targeted 627 Twitter accounts focused predominantly on tweeting negatively about Amber Heard and her female supporters. This report also predicted Evan Rachel Wood was the next person who will be targeted in this supposed online bullying campaign. However, all Bot Sentinel really did was repeat the talking points of Amber Heard supporters like Eve Barlow, who was probably behind the funding of this report, if not Amber's PR people themselves. When this report was released, Evan Rachel Wood posted the parts about her own online harassment in her Instastories.

Because Evan reposted excerpts from the Bot Sentinal report which was focused on Amber's harassment, the media saw it as Evan supporting Amber. However, the excerpts Evan reposted were only those that focused on her and not Amber. Keep in mind, Evan has never come out in support of Amber Heard's allegations against Johnny Depp, even though most people falsely assumed she did.

Evan, through posts in her Instastories, appeared to distance herself from Amber Heard and criticized the media for falsely reporting on her post from the day before. In doing so she upset some fans by seemingly comparing Heard to Harvey Weinstein. The Weinstein comparison was deleted when Evan saw it being reported on.


In light of all this, let's take a look at some things Evan posted and offer some commentary.
July 20, 2022 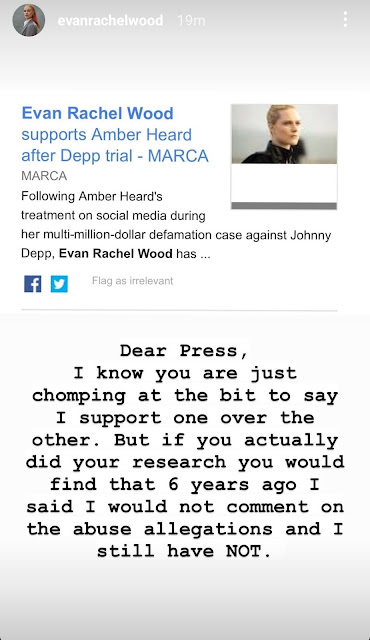 This statement by Evan is significant. First, despite the trial being over, Evan still refuses to take Amber's side, but she is not taking Johnny's side either. She wants to remain neutral and play both sides so she won't upset any of her own fans and supporters. Also, she doesn't want the two cases to be mixed up and intertwined. The media however is hungry to hear her take a side and is forcing her to do so. Second, six years ago, when Evan didn't take a side, the MeToo movement hadn't really become the sensation that it would eventually become, and along with it the mantra "believe all women" was not a thing. However, today, Amber's supporters are expecting Evan to support Amber, otherwise it would be inconsistent for Evan to insist everyone believe her allegations while she herself does not believe the allegations of Amber. For some reason, as we shall see, Evan does not seem to understand the logic of this. 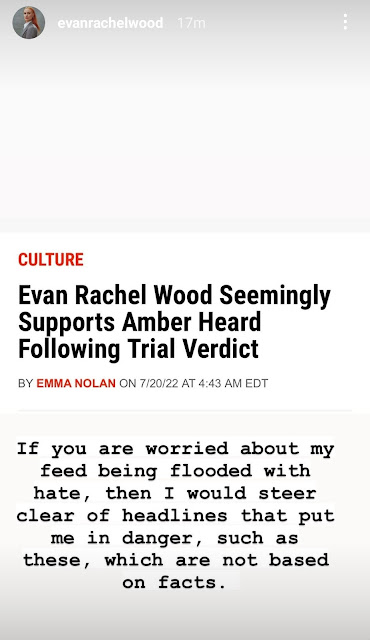 I don't know if Evan is talking directly to Emily Nolan, to Newsweek or to the media in general, but she is certainly trying to persuade through guilt and manipulation to not report on anything she says falsely. For some reason, she thinks the media should be worried about her. Why? Because, she says, her feed gets "flooded with hate". This begs the question: what feed? The only public feed that people could issue hate against her would be through her sole social media account, which is Instagram, but on Instagram she has had her comments limited to only her friends and sycophants. You will not find a negative comment on her Instagram, at least from the past few years. So what feed? Basically, the feed does not exist. It is either something she has conjured in her delusional mind, or she is using talk like this to manipulate the media into giving her fair and accurate coverage that is consistent with her own narrative that she is trying to forge for herself. And this further means that since there is no such feed, she is not in any danger. And even if she did allow comments and received a ton of negative comments, she still would not be in danger. Words are not sticks and stones. Lastly, to take her lies and manipulations a step further, she set her account to private, even though by doing so it means nothing; it is pure theater. 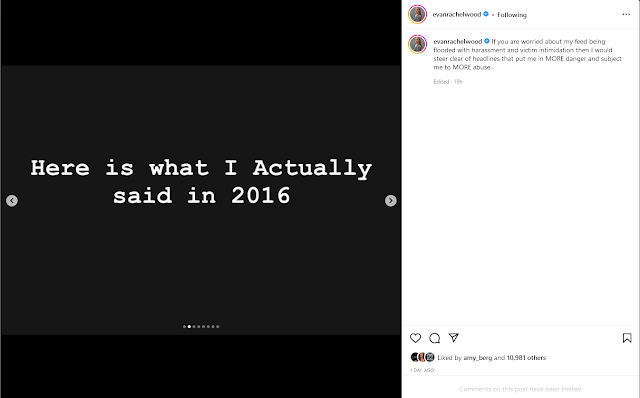 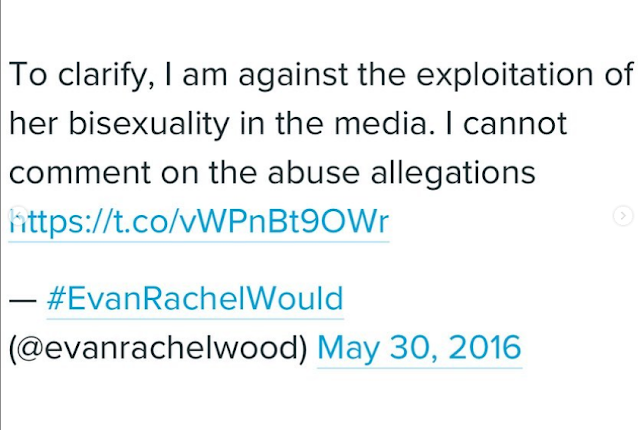 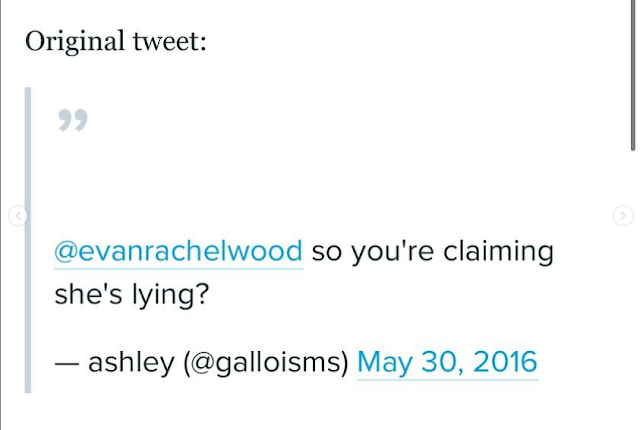 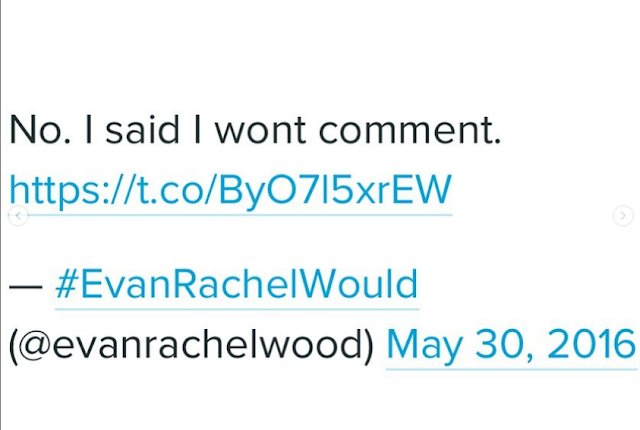 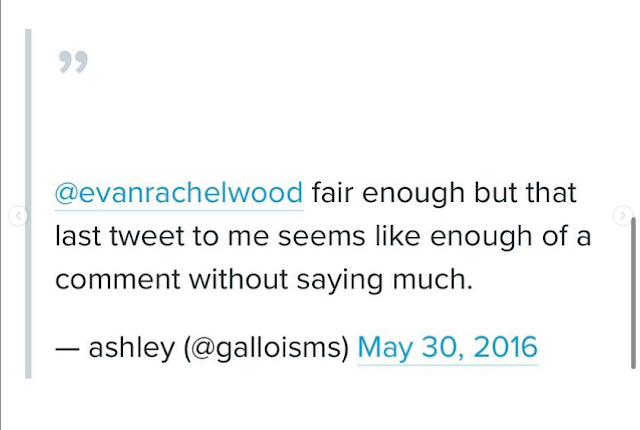 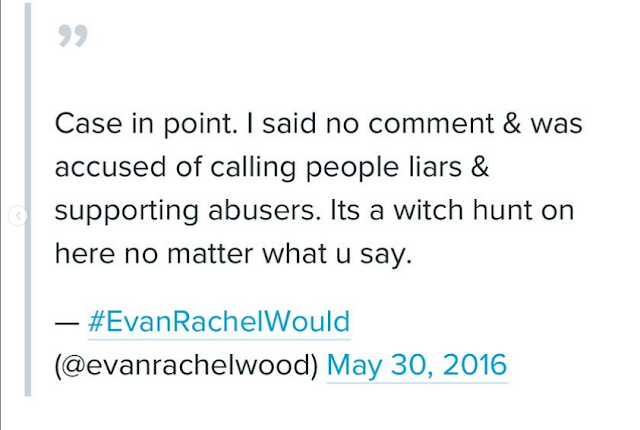 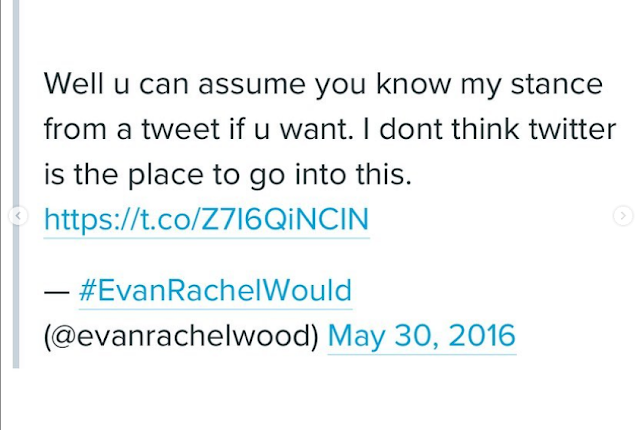 As I said before, Evan is right that she never took a stance on the Amber Heard allegations. But by pushing this point, she is at the same time going against the founding principals of the MeToo Movement and forging her own path, similar to what Rose McGowan did. 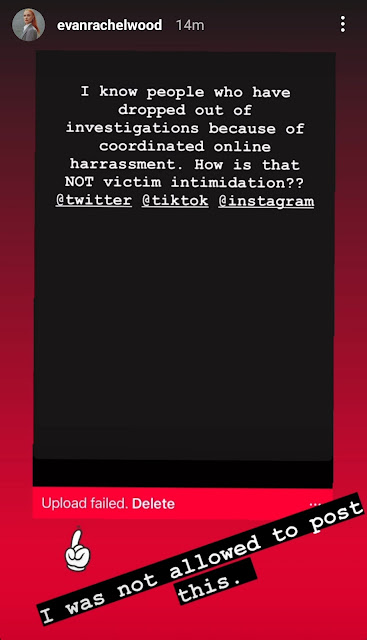 Evan was trying to hold social media accountable by censoring what she calls "coordinated online harassment", alleging she knows people who dropped out of investigations because of it, but it did not upload directly, so she reposted it with a conspiracy theory that she was not allowed to post such a mediocre comment. What probably happened, was that being in rural North Carolina, and using her outdated blackberry, the upload probably failed and she didn't try twice. But for Evan, any chance to play the victim is a chance quickly taken. 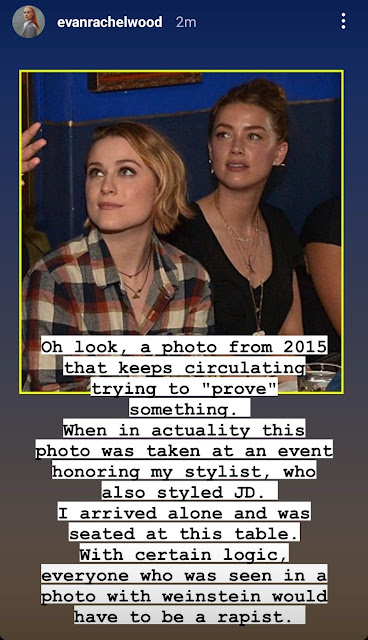 There is nothing here that I really disagree with Evan on. I think she is telling the truth. The Weinstein comparison got her in trouble, but it was taken out of context, or maybe misused by her. However, by people taking this out of context, she had a meltdown. As far as I'm concerned, she got a taste of her own medicine. She literally made a whole documentary about her ex-fiance taking him out context over and over again. I find it refreshing that she gets to see how it feels, and how horrible it is to be taken out of context. Also, the fact that she knows this photo keeps circulating means that she is following accounts that have been circulating it. 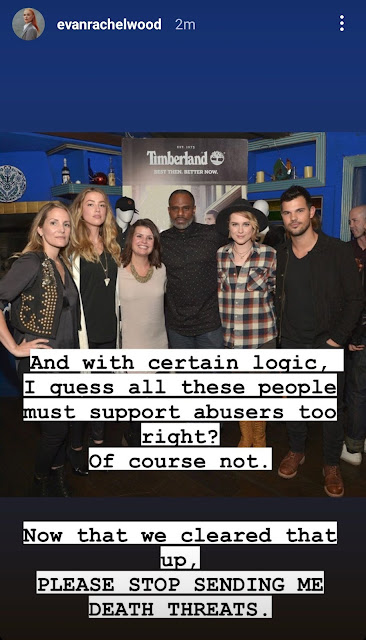 I'm still confused by what Evan is trying to say here. The implication seems to be that she is calling Amber Heard an abuser. You really can't escape this interpretation. Maybe that's not what she meant to say, but she did. Again, I find it very refreshing that Evan is finally getting a dose of her own medicine. Great hypocrisy is being shown here on her part. And I want to repeat, NO ONE IS SENDING EVAN RACHEL WOOD DEATH THREATS, BECAUSE IT IS IMPOSSIBLE TO SEND MESSAGES TO EVAN RACHEL WOOD. She is using talk about "death threats" to intimidate the media and manipulate people into feeling sorry for her. 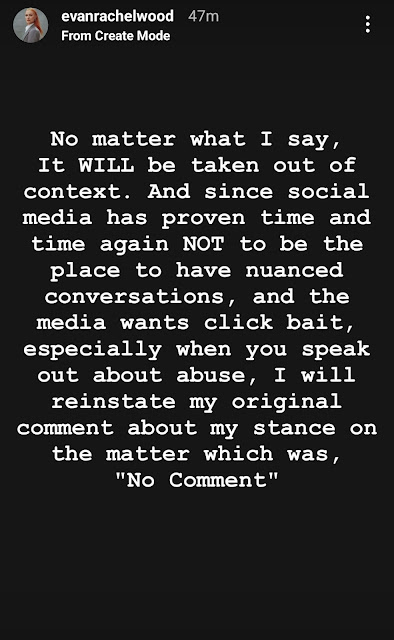 Taking Marilyn Manson out of context and refusing to understand and accept the nuance and commentary behind what he does is what Evan has dedicated herself to doing, and made an entire documentary relentlessly doing. The hypocrisy of this statement is staggering. She is literally a darling of the media, and she complains when one little thing does not go her way, and has a complete meltdown. 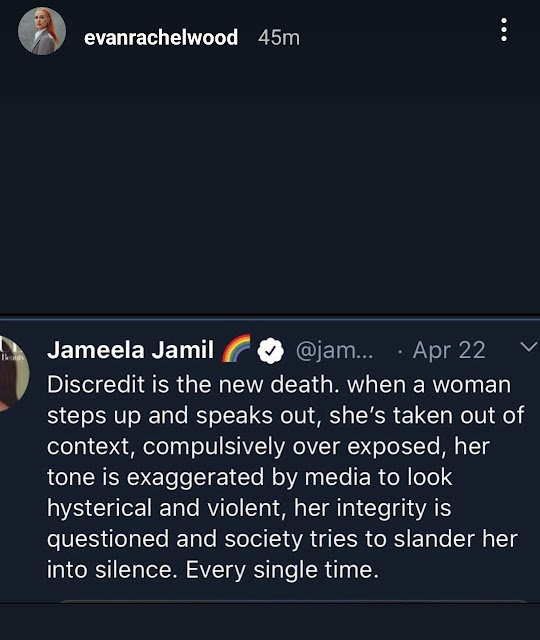 This statement is not true. This is not about women. It is about when certain women lie and falsely accuse that they are discredited, as they should be. Furthermore, if Evan really believes this, then why doesn't she come out and fully support Amber Heard. By her not supporting Amber, she becomes part of the problem instead of the solution. 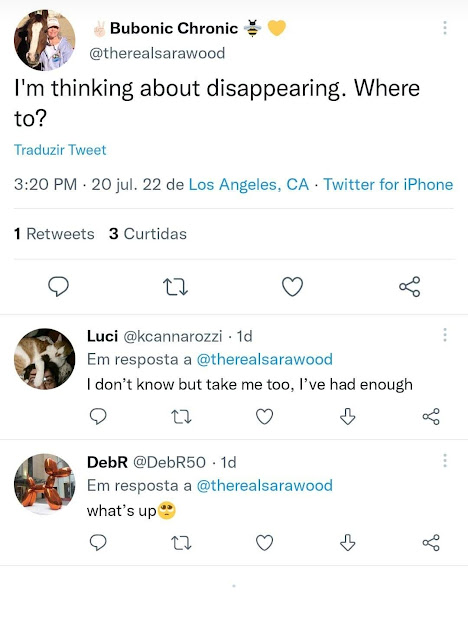 Like mother, like daughter. Always looking to disappear when things go rough. (Sara is Evan's mother)
July 21, 2022
The following tweets and posts come from Eve Barlow. 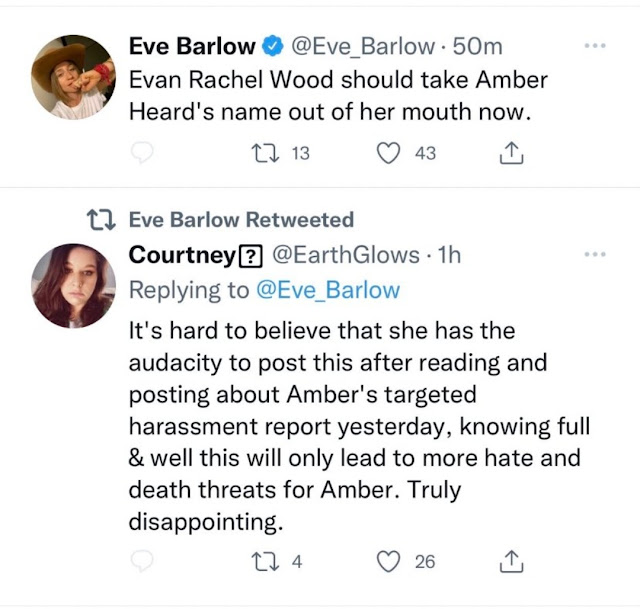 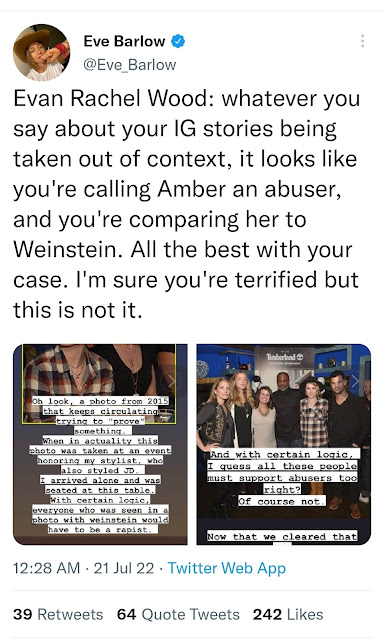 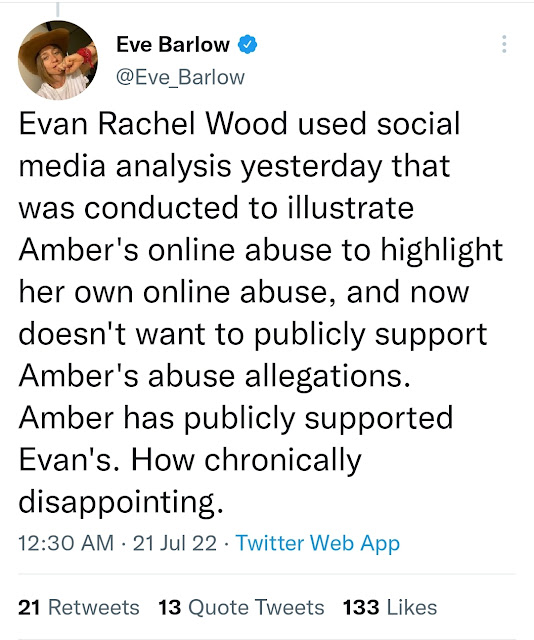 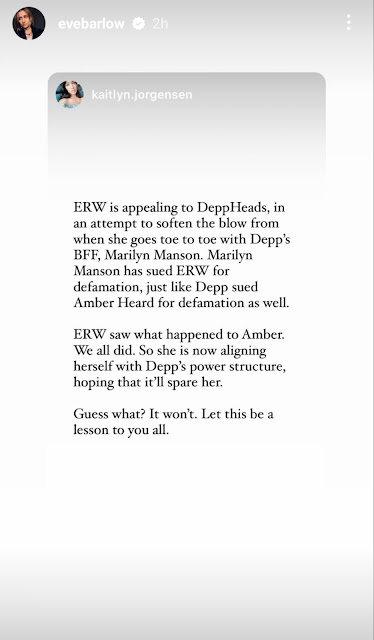 Things really went sour for Evan when Eve Barlow went on a social media storm against her, not only for not coming out and supporting Amber, but also for comparing Amber to Weinstein and seemingly calling her an abuser. This is when Evan went into full meltdown, without directly addressing Eve.
We continue with posts from Evan Rachel Wood. 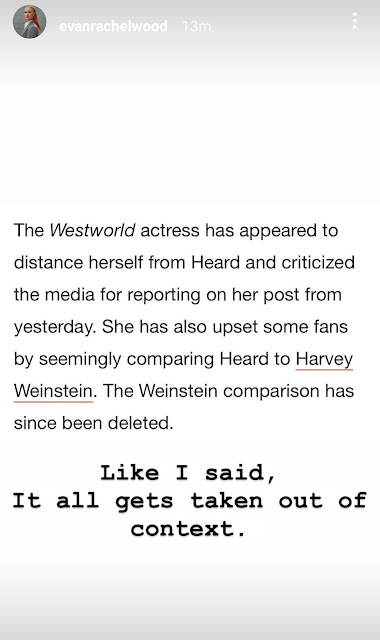 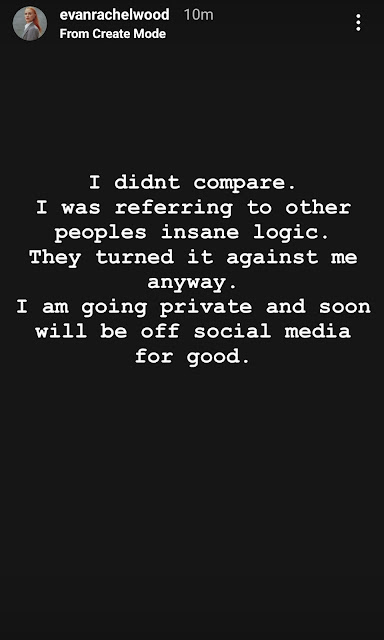 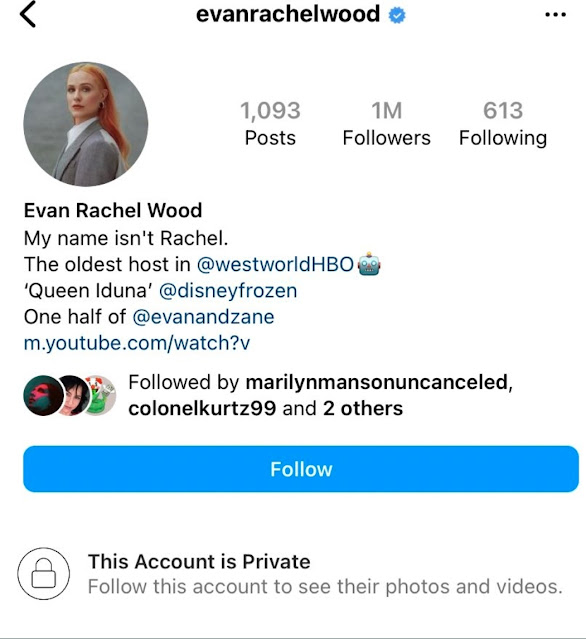 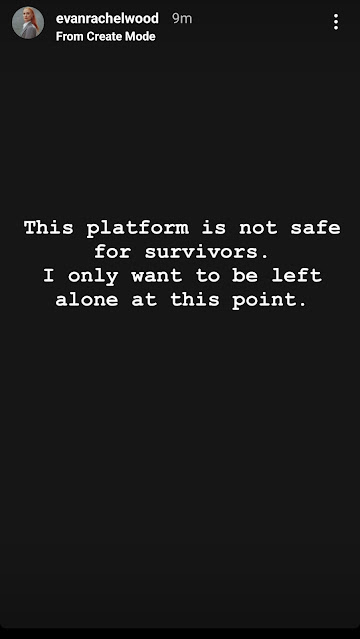 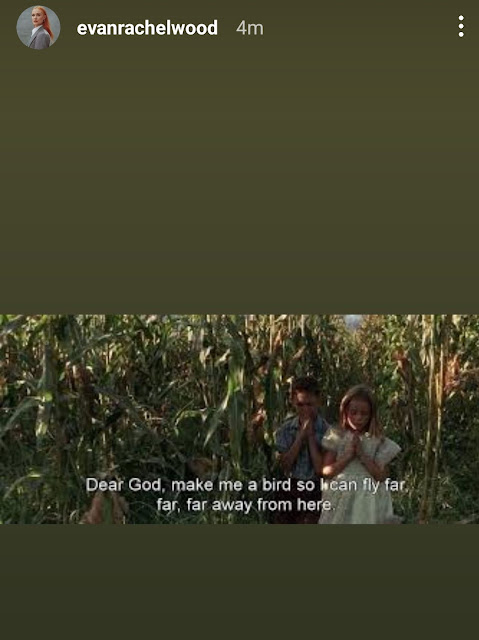 This is from Forest Gump, the scene where Jenny flees from her abusive father.
July 22, 2022 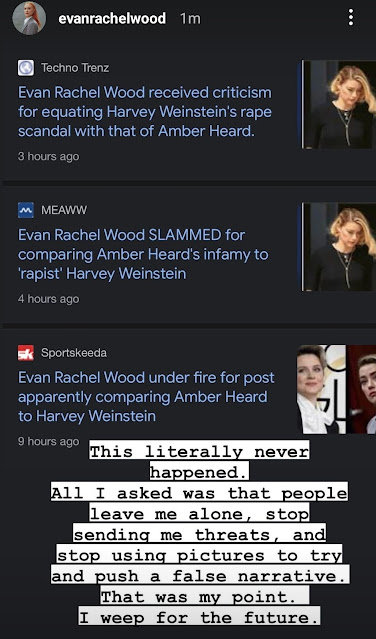 Concluding Remarks:
As Evan weeps for the future, I offer these concluding remarks. What you just witnessed was Evan Rachel Wood have a meltdown. For a moment, she lost control of the narrative, and had a meltdown. What we see above is Evan displaying her hypocrisy and fear, while at the same time intimidating the media through manipulation to stick to the narrative she is handing to them. She refuses to acknowledge she made any mistakes in the process, but turns the situation into her being the victim of the media twisting her words. Clearly, she could have said things better, no matter how well-intentioned she was, but still, what she said and the way she said it was perfect, and it is the media's fault for not reading her mind and interpreting what she said perfectly. I have said it many times, that Evan suffers from many mental illnesses, which she acknowledges, but one she does not acknowledge is paranoia, which is the result of her needing control over all aspects of her life. In fact, a few weeks ago, on a panel for the new season of Westworld, Evan goes into some detail about her paranoia when it comes to technology, and during this panel she said she would soon be getting off social media due to the fears that were instilled in her through the show Westworld (video below, especially after the 16 minute mark). Now she is talking about leaving social media by spinning it to her advantage as a victim and to manipulate the media to get with the program, which is her program. Evan is all about control. She is obsessed with having control over all aspects of her life. When you see the allegations against Marilyn Manson in this light, a lot begins to make sense.