Evan Rachel Wood as a Manipulator (Part 1 of 4) 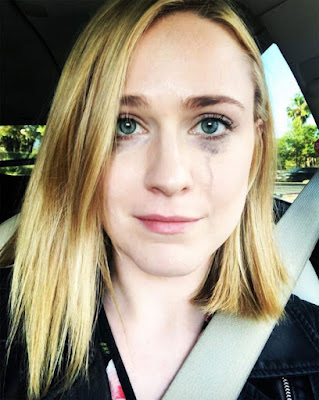 In my article "Evan Rachel Wood in 2017: Radicalization Realized" I ended with a short analysis of an article Evan Rachel Wood wrote for Nylon titled "What A Time To Be Alive", published on November 17th 2017, where she describes all she "learned in the year since Trump was elected". This is an important article to be aware of if you want to understand her radicalized mentality. I will not recap what I already have in my previous article, but here I would like to offer an analysis of the section I did not cover where Evan describes her abuse and abuser - whom we all now know she claims to be Marilyn Manson, but at the time was not yet named.

It is when Evan Rachel Wood talks about her abuse and abuser that Evan the real person shuts off and Evan the actress is turned on. She wants to make her abuse sound so horrifying, that she will draw mental pictures in your head to manipulate how you should think of everything she tells you, instead of allowing you to take the facts and form your own picture and objective opinion. She will dramatize the event in a way that is more dramatic than any movie she has ever been in, so you can feel her pain at its very core. In other words, it is a massive manipulation.

Let us examine her words paragraph by paragraph and I will offer my commentary (her words in blue):
These thought patterns in my head are remnants of a dark past. The shrapnel of a war, a wreckage like the Titanic at the bottom of the sea; an empty, hollow, and decaying shell of a vessel that resembles the form of something it once was. Something that was said to be so powerful, it could never be destroyed, the mental scarring of gaslighting.
Evan begins by taking her readers on a journey. She invites them into her head, where there are remnants from bygone years that are dark. The wheel is spinning, we are entering the twilight zone. It's as if she is saying: "Are you experiencing this dark abyss? If not, you aren't where I want you to be as we embark on this journey. You must enter my head and feel darkness, otherwise nothing else I say will mean anything. And you must understand that this darkness comes from my past. It is not really who I am. Somebody shut the lights off in my head, not me."
Evan is now preparing her readers to accept her forthcoming claim of having PTSD. She does this first by claiming that what she experienced in the past at the hands of Marilyn Manson is equivalent to what a war veteran experiences on the battlefield. "You want to know what D-Day was like? You want to know what it felt like to storm the beaches of Normandy? Then let me tell you about being in a relationship with Marilyn Manson."
Then she compares her life before her relationship with Manson as a beautiful and powerful vessel like the Titanic, but after the relationship she was nothing but some "empty, hollow, and decaying" wreckage at the bottom of the sea. Her life before Manson, she claims, was thought to be so powerful that it could never be destroyed, but because he mentally scarred her with gaslighting, she is but a "shell" of what she once was.
Gaslighting is when someone hijacks your mind. They break your will and self-esteem through careful manipulations. They cause intense hysteria and paranoia to cut you off from the outside world, so that you are easier to control. They make you question your own sanity if you dare to second guess motives or step out of line.
Let's break this down to what Evan is really saying:
"Marilyn Manson hijacked my mind."
"Marilyn Manson broke my will and self-esteem through careful manipulations."
"Marilyn Manson caused me to be hysterical and paranoid."
"Marilyn Manson cut me off from the outside world to be more easily controlled."
"Marilyn Manson made me question my sanity when I second guessed his motives or stepped out of line."
In other words, what Evan wants her readers to believe is that when she was with Manson, she was manipulated to such an extent that she couldn't think ("mind") and she couldn't choose ("will"). By doing this she is removing herself from any personal responsibility and is telling her readers, "Do not question me about my claims and accusations. You must accept everything I say. Do not ask me about anything I may have said or did at the time that may contradict these claims and accusations. I was being controlled. I had no ability to think nor to choose. What you saw was what my abuser wanted you to see. I could not do anything about it. I was nothing but a robot, and he had the remote control over every single part of me. He was an evil and powerful genius while I was an innocent, weak and naive little girl."
If you've bought into this bullshit so far, Evan has you right in the palm of her hands.
By the end of my experience, I felt like every move of mine was being controlled by someone else, and I was being horribly abused emotionally and physically. To be honest, the physical abuse was easier. To cope, I developed a hell of a case of cognitive dissonance and disassociation.
As you recall from my previous articles, one of the primary motivating factors that led to Evan's radicalization was her complete embracing into her personal life of her character on Westworld. A character where she plays a robot who is abused and controlled and is not allowed to think her own thoughts. This is just a confirmation that Evan has merged with her character Dolores and has lost all sense of her own reality and identity. It is a pathetic display of manipulating her audience to identify her reality with her Westworld character. In doing so Evan has become Delores, she just responds to the name Evan.
Furthermore, Evan has now become a psychologist, diagnosing herself with "cognitive dissonance and disassociation".
Cognitive dissonance is "the state of having inconsistent thoughts, beliefs, or attitudes, especially as relating to behavioral decisions and attitude change."
Disassociation is "the state of being unconnected in memory or imagination." (???)
Evan is such a bad psychologist, that she spelled the second one wrong. She probably meant Dissociation, so let me correct her:

Dissociation is "a mental process of disconnecting from one's thoughts, feelings, memories or sense of identity."
Again, here Evan is driving home the point that Manson brought her to such a state of mental illness, that she could not think or choose for herself, but was being controlled, which explains all her smiles while she was with Manson, all her expressions of love, why she defended him time and time again, why she never spoke negatively of Manson in public, why she seemed so happy to be with him, why she accepted his proposal for marriage. In reality, this was Manson controlling her, making her into his ideal woman. "So when you hear me saying anything good about Manson, well, I didn't really mean it, it was just Manson using me as a puppet to say what he wanted me to say. If you don't accept this fact, then you are being manipulated by my abuser just like I was back then, but no longer am." This is what she would have us believe.
We must also ask, if she had "cognitive dissonance and disassociation [?]", does that mean she still has it? Who is to say she doesn't? Perhaps it is now her mind and will are being controlled, and not in the past? If she was capable of it in the past, why isn't she capable of it now? Can someone with such a mental illness ever be trusted with her own biography, with her own recollections? At this point, she is telling me loud and clear: "Do not trust a word I say! I have at least two mental illnesses that make me an untrustworthy communicator of my own thoughts and feelings, and I'm not on any medication to treat them!"
To conclude part one, we must highlight the psychological words Evan wants ingrained in our minds at this point, because whenever she describes her abuse she wants you the reader or listener to form in your mind a psychological profile of Evan Rachel Wood as a legitimate victim of abuse. In reality, however, the way she uses them reveals the psychological profile of a manipulator:
1. Gaslighting
2. Cognitive Dissonance
3. Dissociation (not Disassociation)
PART TWO