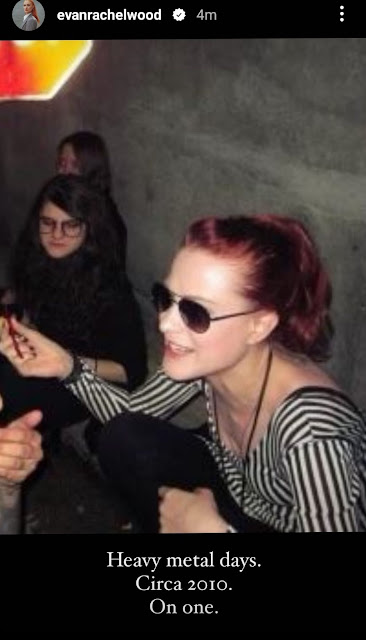 On November 15th 2022, Evan Rachel Wood randomly posted the photo above in her Instagram stories. She says it was taken during her "heavy metal days" around 2010, and added the words "on one" which indicates that she was under the influence of some sort of drug and/or alcohol. It was a bit odd for her to randomly post this within such a cryptic context, though it is common for her to do such things if she is trying to hide something, but an anonymous source contacted me and clarified for me what is really going on in this photo.

The photo dates back to October 2010, when famous photographer Terry Richardson photographed Evan Rachel Wood backstage at a Slayer concert in New York, basically having a good time and doing drugs. Richardson posted these photos on his social media back then, though today they are mostly deleted. Luckily for us, my anonymous source saved these photos and shared them with me below: 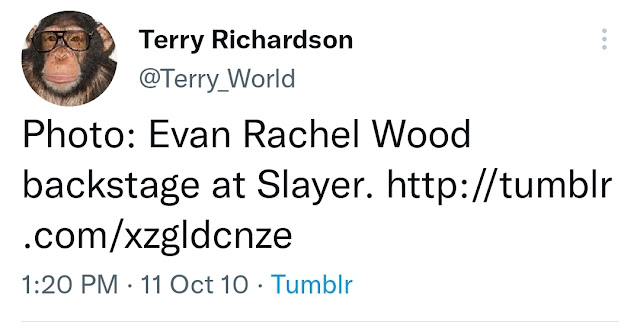 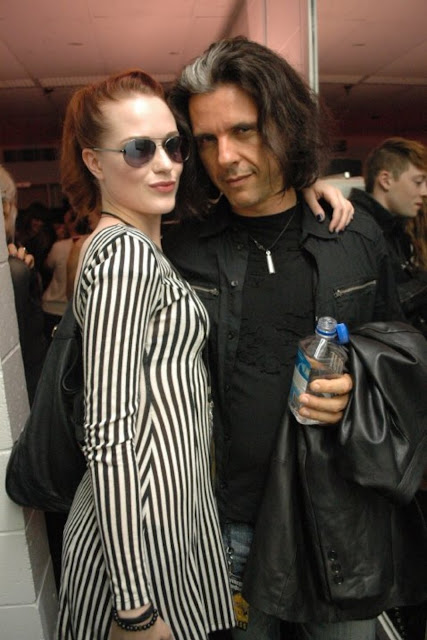 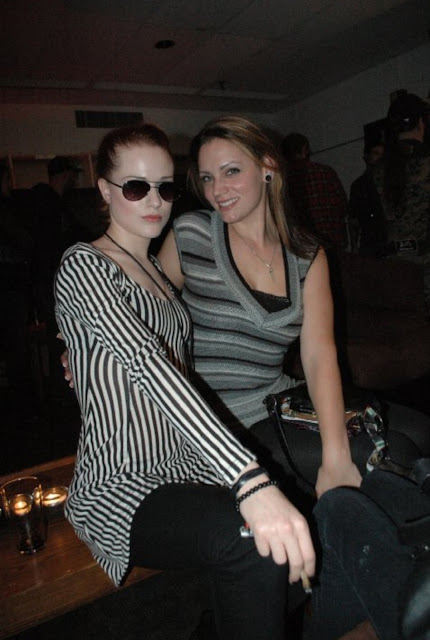 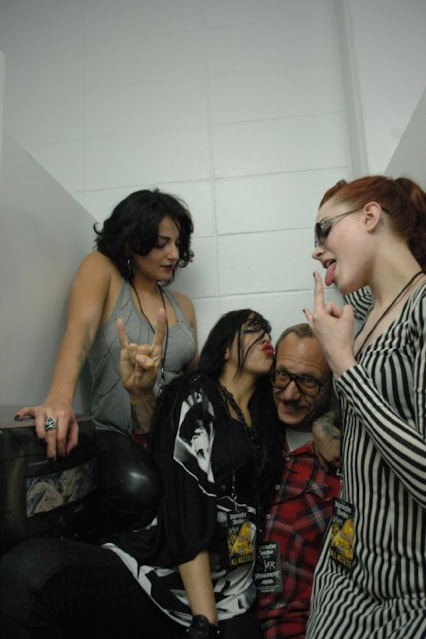 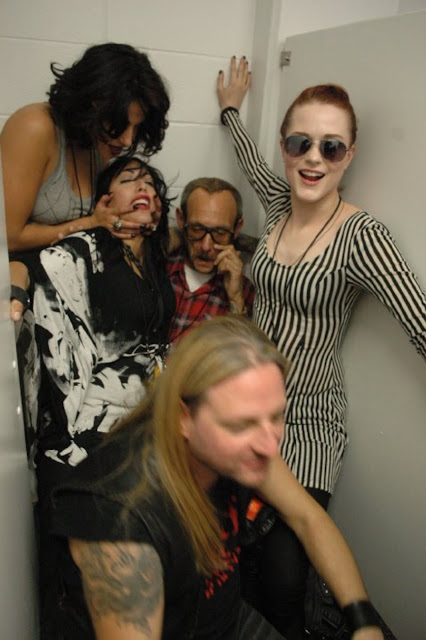 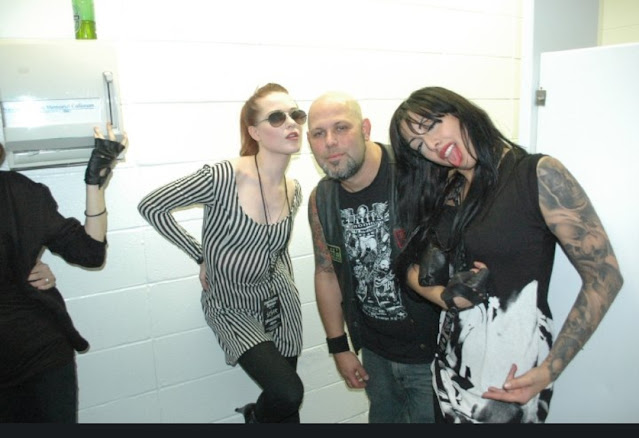 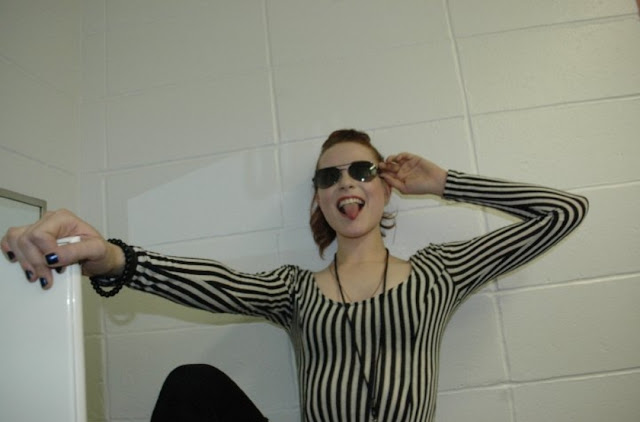 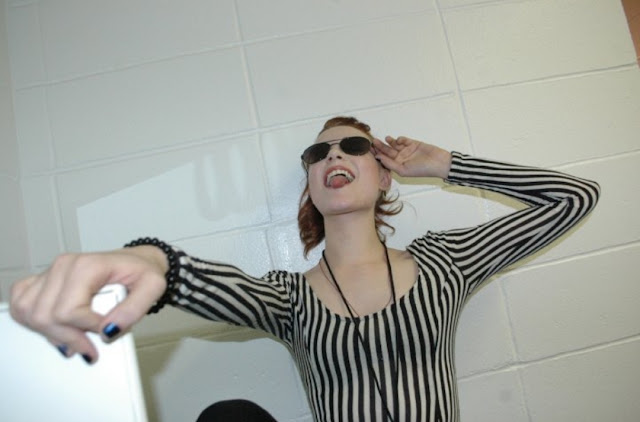 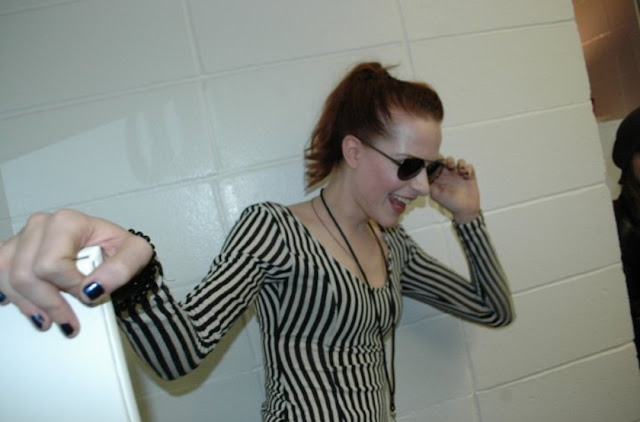 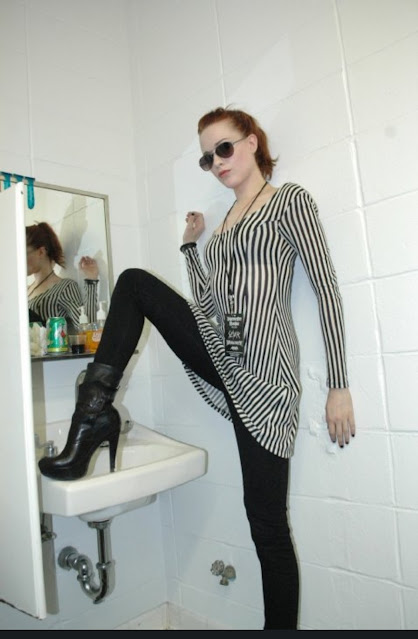 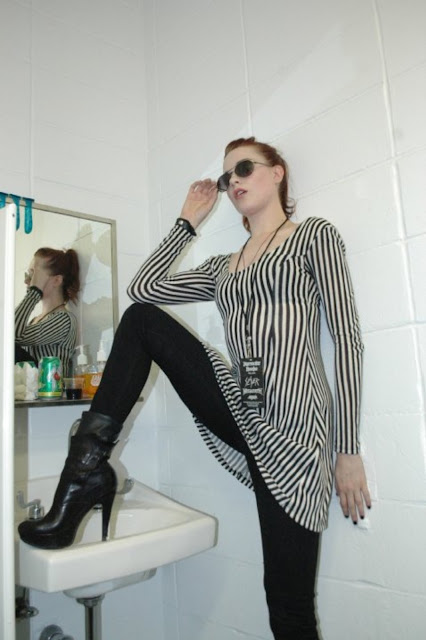 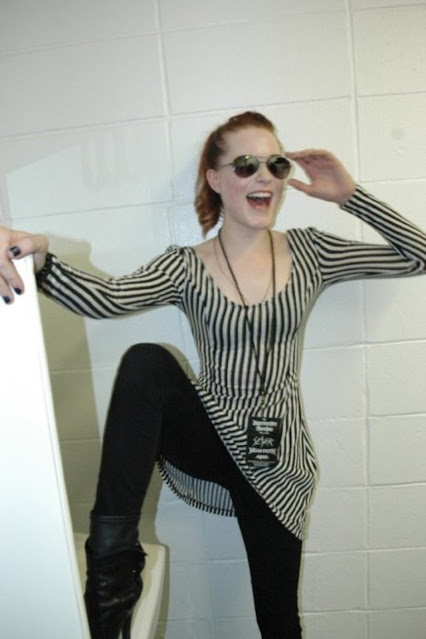 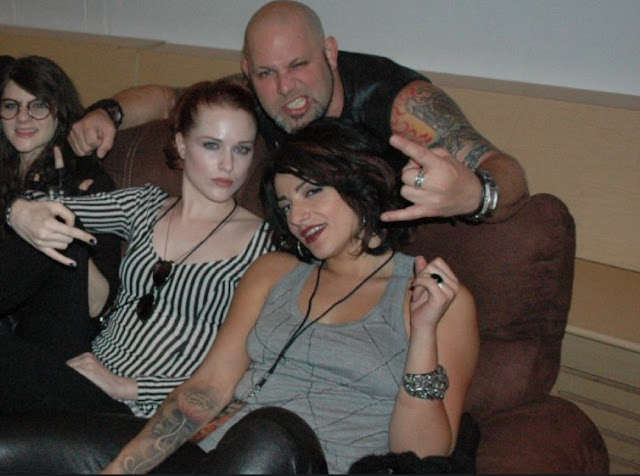 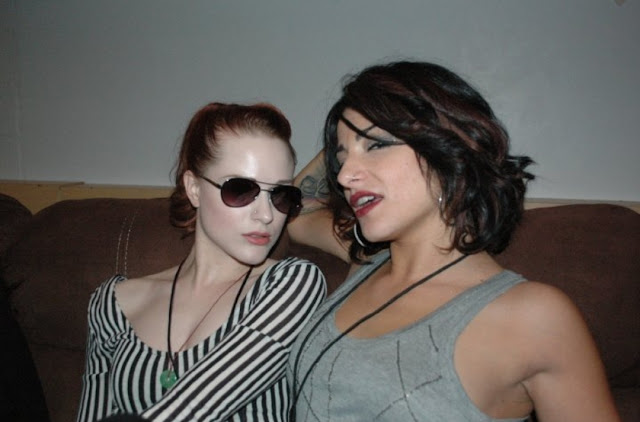 Just Jared also posted a series of photos on October 12th 2010, which have also been deleted (curiously, even the Wayback Machine says the content of the link to the article was removed). According to Just Jared, these photos were taken at the Nassau Coliseum on Long Island, New York on October 8th. It describes her as going backstage after the show with friend Ayesha King and she met Slayer guitarist Jeff Hanneman and his wife Kathryn. They can be seen below: 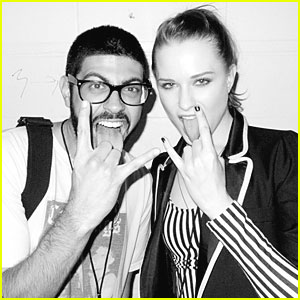 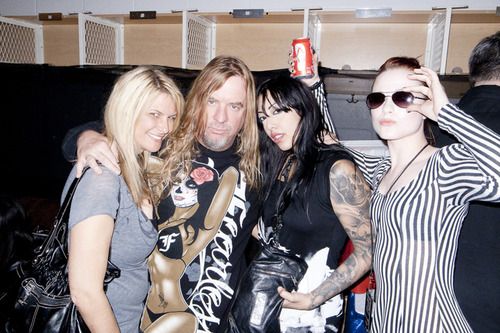 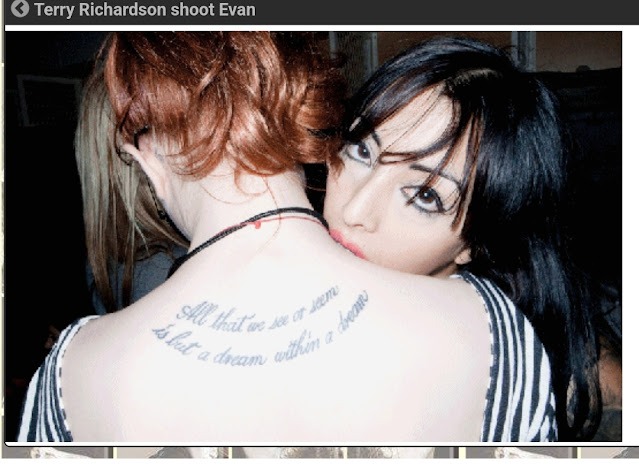 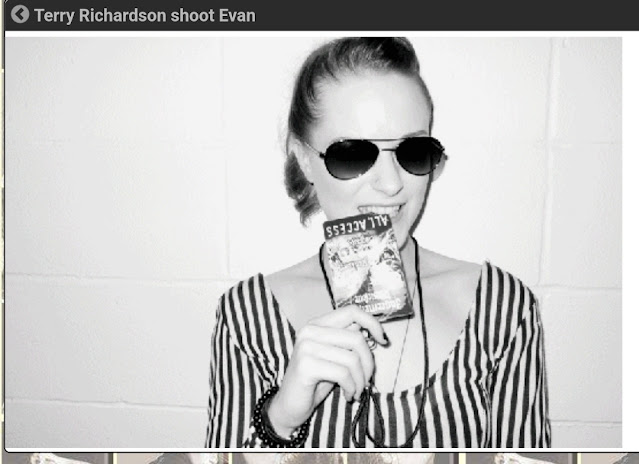 It should be noted, Marilyn Manson and Slayer did a summer tour together in 2007, and Evan was with Manson during this tour. This probably explains her friendship with Ayesha King, wife of Slayer guitarist Kerry King.

As I thought more about this evidence before me, I was able to finally put things together.

In Phoenix Rising, Evan Rachel Wood says the following in Part Two in a conversation with Illma Gore, talking emotionally about what happened with her after she and Manson called off their engagement in August 2010:

"I was on antidepressants. I had left Manson, but he was still calling me a lot. I ended up getting on somebody else's tour bus, and doing a lot of drugs. And I got to Sacramento, and got off of the bus, and it was like, it just hit the second I walked off of the bus. It was like this wave, and I just said 'I'm gonna die tonight', like 'this is it', like 'I just can't go any further'."

Evan then goes on to describe a suicide attempt in her hotel bathroom that night, calling her mother to meet her the next day, and then checking into a mental hospital afterwards.

Recalling this section from Phoenix Rising, I then looked into the dates of Slayer's 2010 American Carnage Tour (with Anthrax):

Everything seemed to fit Evan Rachel Wood joining Slayer and Anthrax on tour from New York to California, but the problem is that she said she got off the tour bus in Sacramento, and the tour bus during the tour was nowhere near Sacramento.

It should also be mentioned that Evan has said on more than a few occasions that her suicide attempt and check in to a mental hospital took place when she was 22, but on September 7th 2010 Evan had turned 23.

I then asked another anonymous source who is familiar with what Evan was doing during this time period, and it was confirmed to me by this source that Evan did indeed claim to join Slayer on tour in October 2010.

Therefore, it is confirmed that Evan did indeed join Slayer on this cross country tour in October 2010. During this tour, according to Evan, she did a lot of drugs and reached the lowest point of her life.

However, it is also confirmed that Evan was 23 and not 22 during this time, as she had alleged. Evan is known to always make herself out to be younger than she was when it comes to being victimized by Manson, and here we see another example of this.

But what about the claim that she tried to commit suicide in Sacramento and then checked herself into a mental hospital with her mom? I have analyzed these stories elsewhere, and am very much inclined to believe that there is no truth to this. There may be some truth behind this claim, however, such as the possibility she may have gone to rehab for her increased drug problem, but the more we examine her story of her suicide attempt and her mental hospital stay, the more outrageous and false it sounds. Now that we have found even more details to the story, the more it sounds like a fabrication.

Despite the lies, we can comfortably now say that it does indeed appear like Evan joined Slayer on tour in October 2010 and did a lot of drugs. Everything else is highly suspicious. 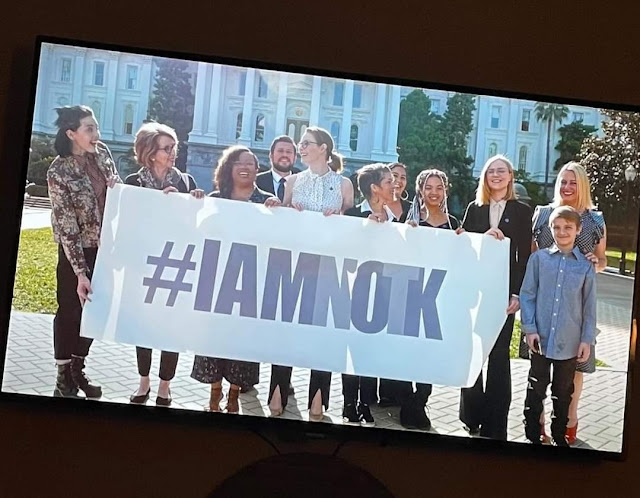 Update #1 (11/18/22): Now that we know Evan didn't get off Slayer's tour bus in Sacramento, where she also alleged in Phoenix Rising that she attempted suicide in a hotel room, I was wondering why she chose Sacramento for this story. Then I remembered that the Phoenix Act was passed in Sacramento, and it would have set a perfect cycle for the theme of a phoenix rising. 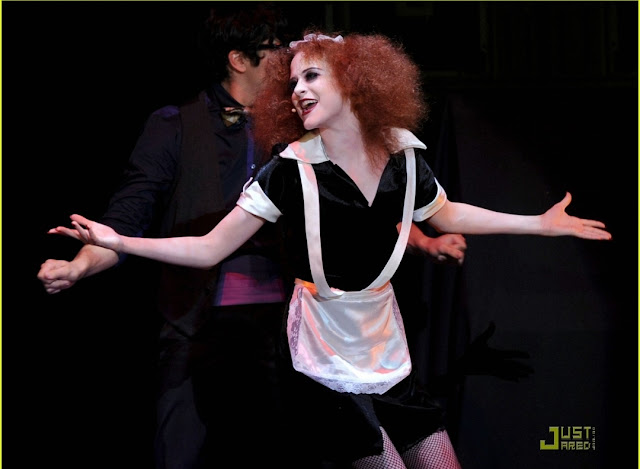 Update #2 (11/18/22): On October 28, 2010, Evan played the role of Magenta in a production of The Rocky Horror Picture Show at the Wiltern Theatre in L.A. If Evan toured with Slayer till approximately October 20th or the 21st, then by her timeline in Phoenix Rising she slashed her wrist deeply with glass when she got dropped off in Sacramento, then a few nights later checked herself into a mental hospital where in her essay about her stay she describes what seems to be at least a two week visit if not longer. But she also needed at least a few days to travel and practice for her role as Magenta. Not only does Evan's timeline of events not add up or make much sense, but even if you try to squeeze it all in and make sense out of the chaos of her timeline, it would be difficult to account for the fact that there were no visible wounds on Evan on October 28th from the deep slashes to her wrist a week before.