Is Evan Rachel Wood Justified in Having a Holocaust Tattoo? 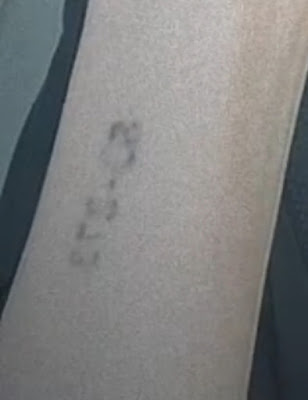 On October 24, 2022, Evan Rachel Wood posted a video in her Instagram stories sitting in her car while listening to music and sliding down her sunglasses as she smiles with a written message on top promoting one of her upcoming Evan and Zane concerts in Hollywood. During this video, Evan's left forearm was exposed and for the first time I noticed a tattoo with five letters and numbers that looked eerily similar to a holocaust tattoo. What I came to find out is that the fading tattoo is actually the Phoenix Act bill number "SB-273". This tattoo was mentioned in her interview with The Cut on March 15, 2022: "She has a tattoo of the bill’s number, SB-273, on her left wrist," but I never actually ever saw the tattoo, though there is actually a photo in that interview which partially shows it. The question is, however, whether the Phoenix Act bill number tattoo is supposed to resemble a holocaust tattoo? 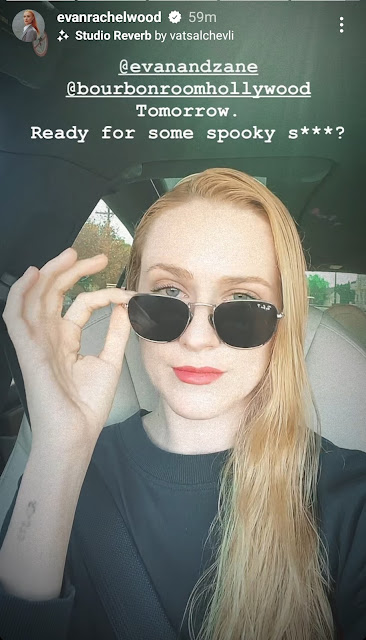 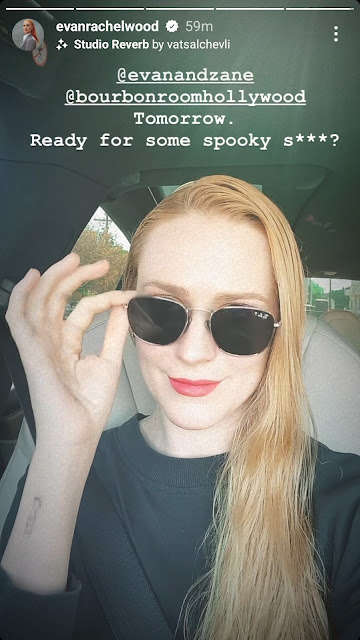 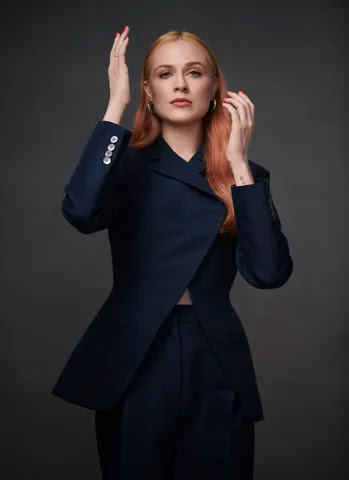 If we take a look at some photos online of holocaust tattoos, we will notice that they were more or less placed on the left forearm towards the top of the forearm to be seen (though there are cases where they are placed higher in the forearm and more towards bottom), and they consisted of either 5 to 7 numbers, or a mixture of 5 to 7 numbers beginning with a letter. Here are a few samples: 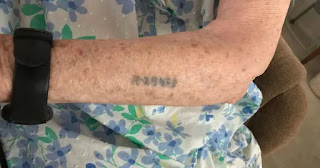 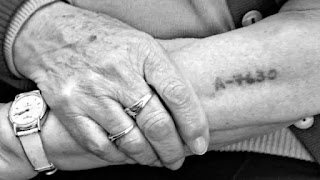 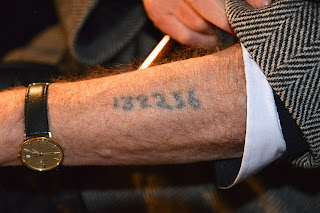 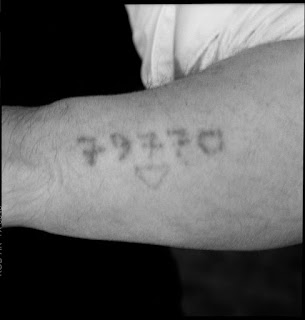 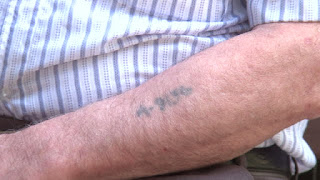 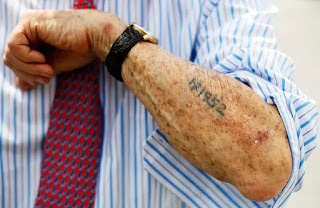 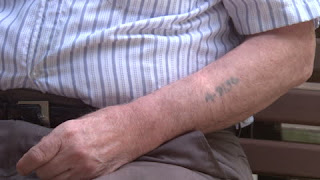 Let's start by making some things clear about holocaust tattoos:

First, not all Jewish victims of the holocaust had a holocaust tattoo. Only certain Jews at Auschwitz Concentration Camp had this tattoo. No other concentration camp with Jews had these tattoos.

Second, these tattoos were given at Auschwitz if you were healthy enough to do forced labor. If you were sick or weak and unable to work, you did not receive a tattoo, but instead were killed or sent to the gas chamber.

Third, the tattoo had three distinct functions: to mark and humiliate prisoners, to prevent their escape and to expedite the identification of corpses already stripped of their uniforms.

A few personal stories to highlight the above:

My grandfather John, who I am named after, was taken prisoner by the Nazis during the German occupation of Greece and he was sent to Dachau Concentration Camp. Like many other prisoners of the Nazis, he was not a Jew. Because he was a Master Electrician, a rare skill in those days, he was held as a prisoner for two years in a section of the camp where he was allowed to walk around freely and could eat better meals than other prisoners in exchange for him using his skill around the camp when needed. He never received a tattoo because he was not a prisoner at Auschwitz, but at Dachau, where none of the prisoners received a tattoo.

A close friend of my family was a Greek Jew from Thessaloniki. One day he and I had a five hour conversation in which he gave me all the details of his arrest by the Nazis, his forced march from Greece to Germany, and his imprisonment and survival at Aushwitz Concentration Camp. He told me how he got his tattoo and he showed me his tattoo. He said that one day the Nazis told all the prisoners of the camp to get in a line. He was very sick at the time and unable to barely stand, but he knew that if he didn't look strong and healthy he would be killed. As the Nazis went up and down the line, they made the old and the sick and the weak get into a separate line. As hard as he tried to not look it, he was too sick, so he was selected to be among the sick. When a nearby Nazi turned his back for a moment, he jumped back into the healthy line and mustered all his strength to look healthy. This time he managed to fool the Nazi inspectors, and was sent to get a tattoo in order to work. Those who were selected for being too sick and weak, he later learned were killed likely in the gas chamber. 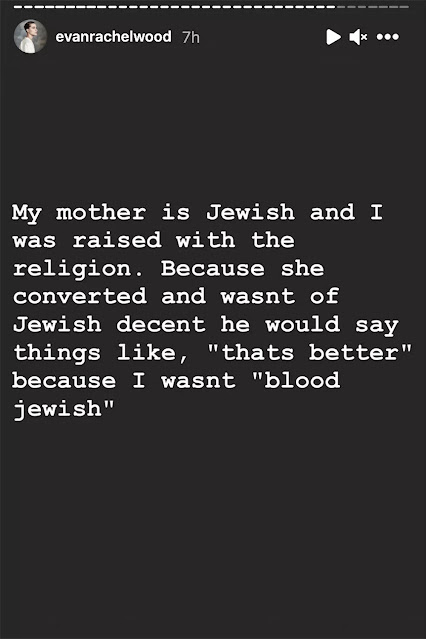 First of all, Evan Rachel Wood is not Jewish by ethnicity. She herself has even admitted this, so it should not be controversial to say. By ethnicity and ancestry Evan is English, Irish, Scottish and German, not Jewish. Evan’s father, Ira David Wood III, is Christian. Evan’s mother, Sara Lynn Moore, who was raised in a Christian family, converted to Judaism during her own high school years (a picture of Evan’s mother in her senior year of high school year book can be seen below). According to the website ethnicelebs.com, we are told the following about Evan's ancestry:

Evan’s maternal grandfather is Richard Alan/Alen Moore (the son of Ira Mack “Denny” Moore and Helen Adoline Fakes). Richard was born in Missouri, and is a prominent landscape architect. Ira was the son of Solomon Festus Moore and Nora Louise McCloud/McLeod. Helen was the daughter of Baron DeCalb Fakes and Rosa Lee Snow.

Evan’s maternal grandmother is Patricia Ruth Burke (the daughter of William Francis Burke and Louise Philippine Hartmann/Hartman). Patricia was born in Missouri. William was the son of Robert Fletcher Burke, who was Irish, and of Hester A. Woody. Louise was of German descent, the daughter of Wilhelm/William Frederich Hartmann/Hartman, who was German, and of Louise Caroline Wissler, who was born in Missouri, to German parents.

Evan’s paternal grandmother’s surname, Winstead, is shared by actress Mary Elizabeth Winstead, who is also from North Carolina. While Evan and Mary Elizabeth likely have a common Winstead ancestor, this shared connection is distant, in or before the mid 1700s.

Secondly, though Evan is not Jewish by ethnicity, she identifies as Jewish because she was raised Jewish by her mother. On the audio commentary on the Thirteen (2003) DVD, Evan described herself as Jewish. In 2012, Evan stated, “I believe in God but I am not religious.” In 2013, Evan stated, “[I was raised] half Jewish and half Christian, but today I practice neither. I am more spiritual than religious.” She has also said, “My mother is Jewish and I was raised with the religion…” What this means is that the only identifying factor of Evan being Jewish is her acceptance of Judaism as a religion, but nowhere does she ever say she accepts Judaism as her religion. If Judaism is not the religion she subscribes to - whether Reformed, Orthodox, Hasidic, etc. - then  she basically cuts herself off from any identifying factor to justifiably call herself a Jew.

Things began to change, however, in February 2021 when Evan named Marilyn Manson as her abuser and accused him of being a Nazi and started referring to herself as his Jewish victim (she claimed Manson whipped her with a Nazi whip from the holocaust). Then in March 2022, Phoenix Rising featured Evan as a Jewish mom raising her son to observe Jewish traditions like Hanukkah. But this no more makes you Jewish than Evan also celebrating Christmas with a Christmas tree. Performing the ritual of a Jewish tradition does not mean you are Jewish; you have to actually believe what is behind that tradition and that God's chosen people are the Jewish people.

Since Evan has more and more in the past few years emphasized that she is Jewish, this must mean that Evan has embraced Judaism, right? Not necessarily. Her Jewishness, which relies on her acceptance of Judaism, has never been aligned with such a confession of faith.

To further illustrate where Evan now stands, we could observe how on November 1st at the New York City premier of Weird: The Al Yankovic Story she decided to wear (or accepted the decision to wear) a crucifix around her neck. One could argue that she did this to look like Madonna, which is the role she played in the film, but Evan did not go dressed as Madonna nor was she carrying herself as Madonna. She attended the premier as Evan Rachel Wood, and her dress had more of a gothic style that Morticia from the Addams Family would wear rather than Madonna. The only reason Evan would have worn a crucifix at the premier is either because she wore it as a fashion accessory, or she wore it to mock it, or she wore it because she converted to Christianity (the latter being the least likely). If she is wearing it to be like Madonna, then like Madonna, who was raised as an Italian Catholic and rejected it, she is mocking it and wearing it as a sex symbol, since Madonna views the cross as a sex symbol. If this is the case, then for a Jew to mock a Christian cross is worse than just wearing it as a fashion accessory. And it should be added, it is forbidden for a Jew to even wear a cross, since the cross is viewed as a Christian symbol and mark of identification. The only time it is allowed is if you wear for a good purpose out of your control, such as if you work for the Red Cross and are required to wear the uniform. Some Jews are so pious and strict in not wearing a cross, that when doing a math equation they will replace the plus sign (+) with another symbol so as to avoid having anything to do with a cross, which they equate with a pagan idol. 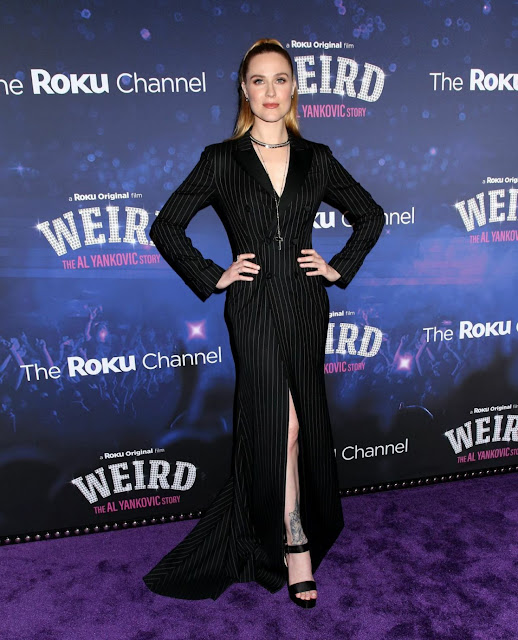 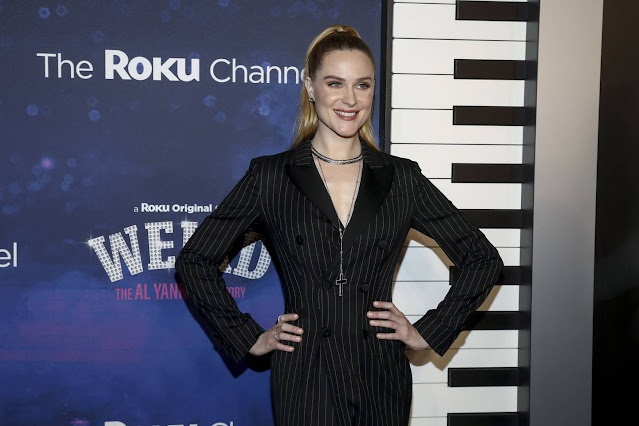 With this being said, Evan's identity as a Jew even according to religion should be questioned.

Is Evan therefore justified in getting the Phoenix Act billing number look like a holocaust tattoo? To me, it seems equivalent to stolen valor.  According to U.S. law, the unauthorized wear, manufacture, or sale of any military decorations and medals is a federal crime. Of course, it is not a crime to get a holocaust tattoo and Evan can do whatever she wants, but no doubt she will argue that what she has done she has done with the best intentions, and seems to be showing the world that she also is a Jew who suffered like the Jews at Auschwitz at the hands of a fiance that she now views as a Nazi and thus earned her holocaust tattoo. I find this extremely problematic, and every individual will have to decide how they choose to view this for themselves. Here, I am just bringing this to your awareness.