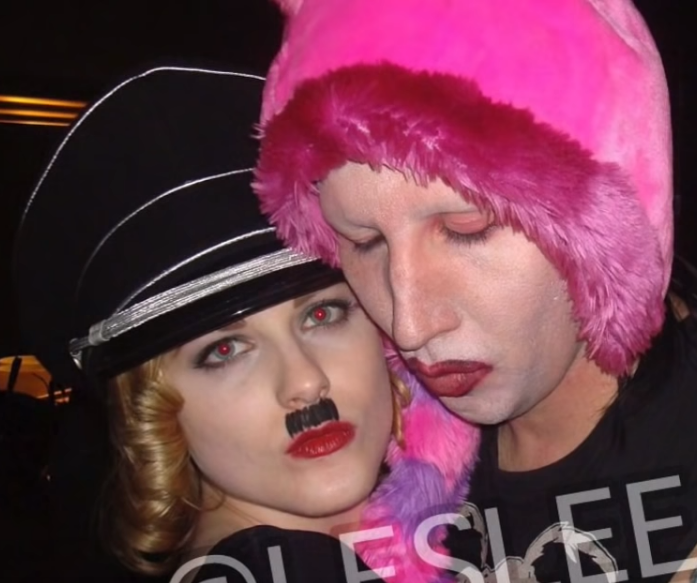 October 31, 2007 was a memorable night for Evan Rachel Wood. It was a Halloween she would forever remember as one that changed her. However, was it memorable for the abuse she suffered that night or the fun she had?

On this night in 2007, Marilyn Manson played his Halloween Show at the Pearl Concert Theater at Palms Casino Resort in Las Vegas, Nevada. Evan Rachel Wood attended this concert of her then new boyfriend Marilyn Manson, and many of Manson's personal friends were also in attendance. Among the songs played that night was 'This Is Halloween', which Manson closed the show with. You can watch his performance below:
After the concert the party was taken to Manson's penthouse. This is the infamous party where Evan dressed as a transvestite Adolf Hitler with the name "Eva Braun of the Dead" (Eva Braun was Hitler's companion and wife, she being 17 when she met him and he being 40), and her brother Ira Wood was a transvestite Nazi. Manson's friend Manzin Dammet describes the party and Evan's behavior that night in this interview with Colonel Kurtz below, beginning at the 36:50 mark:
Seven years later, in 2014, Evan reminisced about this party from seven years earlier on her private Abbey Road account on Facebook, specifically addressing and tagging three of Manson's friends and collaborators who were also at the after party (Manzin Dammet being one of them, along with the magician Rudy Coby and the photographer Tony Silva). It appears that all the contents of this Facebook account were either wiped out or hidden, but this post is one of only two that have remained open to view by the public: 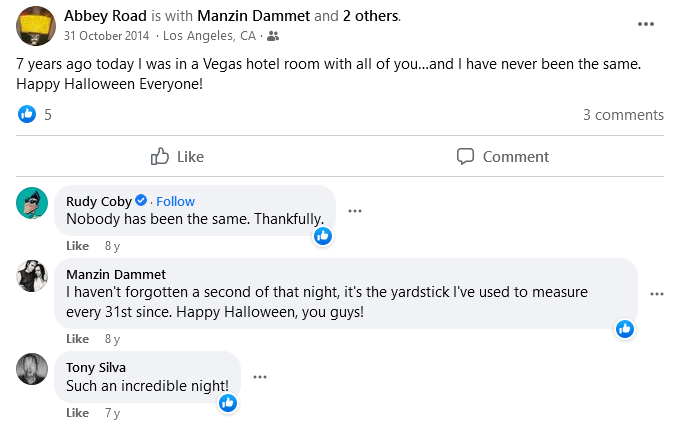 "7 years ago today I was in a Vegas hotel room with all of you…and I have never been the same. Happy Halloween Everyone!"

What this means - "I have never been the same" - isn't totally clear, but what is clear is that the night was very nostalgic for Evan seven years later as she tagged hers and Manson's mutual friends to recall with her that memorable night. She obviously had a great time with no regrets, and it probably was viewed by her as the best Halloween she ever had, if not the best night of her life.

If we fast forward another seven years however, to February 2021, we see that Evan publicly presents her experience of Halloween 2007 very differently from the way she was privately recalling it in 2014 with her friends who were there with her. Evan had just days before named Marilyn Manson as her abuser, and in a separate Instagram post she began making accusations against Manson that he was an anti-semite and Nazi. As a response to this, Leslee Lane, who was also at the party on Halloween in 2007 and was dating Rudy Coby, posted her own private photos showing Evan as Hitler, among other things. Evan then posted the following responses with the photos: 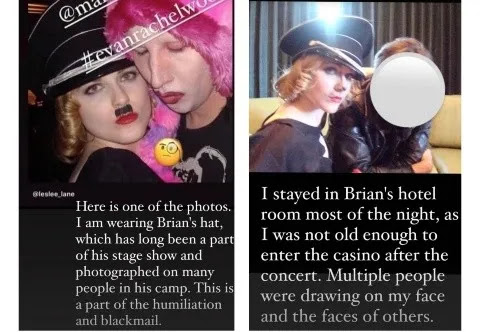 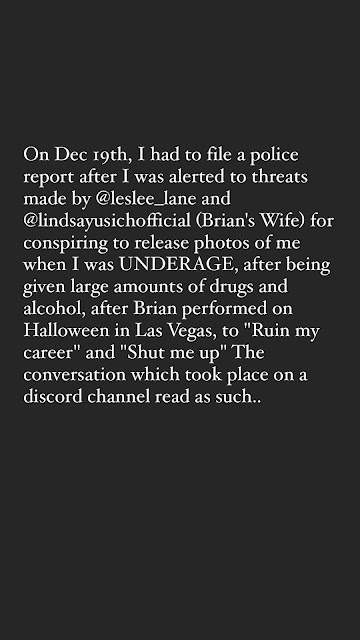 What we see here is not only Evan posting false information (1. She was 20 years old and not forced to do any legal or illegal substances against her will; 2. In Las Vegas a 20 year old is not underage to drink alcohol in a private setting or even in public if accompanied by a parent or guardian of legal age; 3. Manson very likely did not gamble in the casino; 4. Evan drew the Hitler mustache on her own face and there is video of her drawing a Hitler mustache on the faces of others even in 2010. Etc.), but a very different story from her story in 2014, before she was radicalized in 2016 and viewed her experiences with Manson as negative and abusive. Halloween 2007 for Evan Rachel Wood seems to really have been more of a wonderful dream come true (as she came from a supposed strict upbringing and viewed Manson as someone who helped liberate her from the shackles of Hollywood and her mother), but post-radicalization she began to change the narrative as was convenient for her and made her experience that night look like a nightmare. And in February 2021, with the release of those photos, it truly became a nightmare. 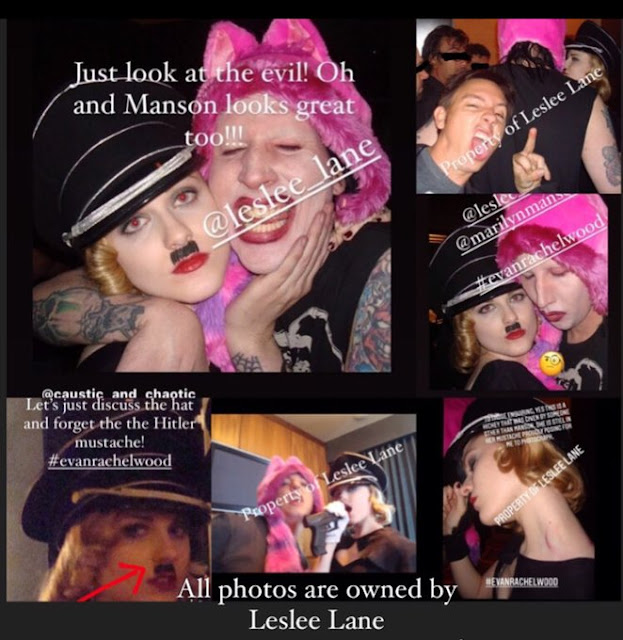