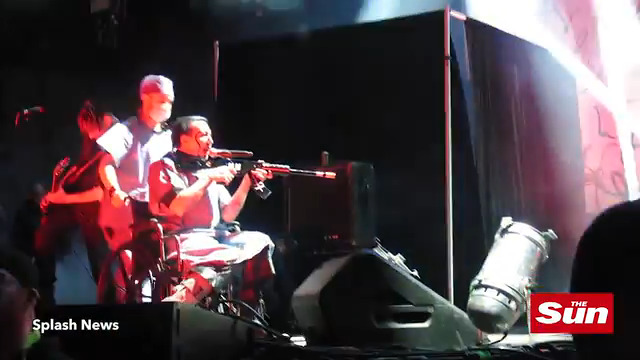 The legendary musician opens up about his gun-totting video for single We Know Where You F****** Live and defends his buddy Johnny Depp from bad press
By Rob Lewis
November 10, 2017
The Sun

I’d been expecting something more gothic, more of a Marilyn’s mansion, if you will, when I was invited to his home.

But why would anything be predictable in the world of the man who hit the headlines this week for pointing a fake gun at his crowd in San Bernardino on the day of the Texas church massacre?

He’s one of the more unnerving people I’ve been stuck in a bedroom with and I leapt at the chance when he said: “I have the new video if you want to see it.

“It was filmed in this room — it’s quite the panty-dropper, huh?” he smirked referring to the seductive surroundings before taking a generous slug of vodka.

He’s not too mobile, hampered by a chunky leg brace, a legacy from breaking a leg a month ago on stage in New York.

His career is on the move again, though, courtesy of unexpectedly aggressive new album Heaven Upside Down. Having charted at No. 7 on its October release, it is his most successful album in a decade.

He hits play on his as-brilliant-as-it-is-debauched video for KILL4ME. It features Johnny Depp, two naked girls and himself in a state of undress.

I recognise the stairs I just climbed and the ornate golden headboard, and reflect that this used to be Depp’s house (he owns the street) and he gifted it to Manson so they could be close.

As the video finishes, Manson says: “At the end, when you see the underwear burning, those are mine — and that’s Johnny’s lighter — he burnt my f***ing underwear!

“I was embarrassed to be nude in front of these two girls, Johnny too.

“We’ve been friends for so long but we don’t sit around and look at each other’s undercarriages.”

Their friendship goes back nearly twenty years. He adds: “We were both white trash from hillbilly country, to use the vernacular, and sharpened our teeth in Florida.”

Manson was also quick to defend his buddy over media comments after the recent Murder On The Orient Express film premiere: “The press said he looked worse for wear and reeked of booze. He looked handsome as f*** and I want to go on record saying that.”

Manson, 48, and without children of his own, is godfather to Lily Rose, 18, daughter of Depp and Vanessa Paradis.

“She’s amazing,” he gushed. “Seeing Johnny raise his two kids who are so intelligent and so successful in just being happy while in a world where their father is always in the spotlight and working is very admirable.

“This gives me hope because I always worried about not being around enough to have my own kids, not the fact I’d be irresponsible or leave absinthe lying around. I’m still not sure it’s fair bringing up a kid in my world.

“I wouldn’t want the baggage that comes with being Marilyn Manson to affect them.”

Manson, whose real name is Brian, was close to his father Hugh Warner, who died in July, and it has had a profound effect on his latest album.

He says: “Heaven Upside Down ended up being the title — originally I was, like a child, all enthusiastic and said it was going to be called SAY10 and released on Valentine’s Day. But at that time I did not know my father was going to become so ill.

“Back then we didn’t have Revelation #12 (the opening track) and Threats Of Romance.

“But those songs now exist because they were written differently. They were all prose, for the most part, just hadn’t been committed to a song.

“It was about having enough space, a couple of months to deal with what was happening in my life and to really absorb the record.

“Since my father died, I’m the last in the bloodline. Maybe I’ll freeze my sperm into a popsicle and I’ll put it in the freezer between the dead hummingbird I found in my yard and the lollies.”

He recalls: “I first met Tyler on the set of Californication and he invited me to his studio. The first fruit of us working together was Third Day Of A Seven Day Binge and almost simultaneously we became like step-brothers.

“He can look at a line in dialogue — in this case lyrics — and bring an emotion to it. And on the track Heaven Upside Down he really hits the notes on that.”

Death is a lingering theme in the gloomy bedroom and Manson’s thoughts turn to Chris Cornell and Chester Bennington’s suicides.

He says: “I grew up listening to Soundgarden though but I always thought Linkin Park sounded like The Backstreet Boys meets Korn — it just wasn’t for me. But later I played shows with them, hung out with them all. I think I took them to their first strip bar — but I’m not really sure.

“I’ve always frowned upon the idea of suicide. Not to be disparaging but I think it affects too many other people. I’m not saying that about Cornell or Bennington, just to be clear.

“I’ve never tried to kill myself because I’d be great at it.

“I’ve even put in my will that when I die, which will probably be never, I want my funeral to be loaded with dynamite and to explode so everyone there dies.”

In 1999, Manson’s career was all but destroyed as he was falsely blamed for influencing the Columbine High School shooting with his subversive lyrics.

Middle America made him their poster boy for hate and his life was in danger.

On the eve of one show, he recalls: “Hunter S Thompson called and said, ‘don’t f*****g go on that stage.’ There were about 40 undercover police officers and snipers because there were so many people saying they were going to kill me.”

In referring to his controversial nun and gun-totting video for his incendiary single We Know Where You F****** Live he explains: “I can see how people can be offended by my art.

“But my intention, from the start, is to make people think. And you need to remember freedom of speech doesn’t come with a dental plan.”

His stance has attracted media criticism, as have his San Bernardino antics, where he brandished a fake assault rifle.

He says: “My shows are never meant to be ill-timed. I can’t help that the world happens the way it does.

“But I can say it was not meant to offend people that have been harmed or affected in that way. I didn’t know about the Texan massacre until I walked off stage.”

But would he have reconsidered his theatrics if he had known in advance?

He says: “I can’t say for sure. I went home that night and tried to watch The Walking Dead and the whole episode was about guns and I’m sitting there thinking I’m being blamed for something that I didn’t really do.

“I’m accepting my responsibility for my performance — it had a theatrical point to it and was meant to say something.

“Sometimes I know where to draw the line, start the line, cross the line but I don’t believe in back-up plans. If what you’re doing isn’t working you have to have the ability to react and adapt like in warfare, and that’s probably something I learned from my Vietnam veteran father.”

But it’s not just the Press that Manson has had a run-in with lately. He was riled by Justin Bieber’s claims to have made Manson “relevant again” by wearing and repurposing classic Manson T-shirts.

Manson says: “I don’t want to judge him as I’ve only met him one time. It’s strange, I had a dream last night where he had grown into the size of the Hulk but he was all yellow.

“You could call it a nightmare I guess, he was shirtless singing Christian rap. It was weird. He had nipple piercings too — I’m not making this up!”

But hip-hop star Lil Uzi Vert seems to hold Manson in much higher regard. Manson says: “He said, ‘you’re real’ and while he grew up in a very different world to me he reminds me of me. I like his voice, approach and that he gets rock ’n’ roll.”

This is no swansong album for Manson. Next year looks like a busy one on the acting front too, with a Stephen King movie in the pipeline.

Before then you can see Manson — complete with his transforming mobility scooter and provocative props — in the UK this December on his Heaven Upside Down tour.