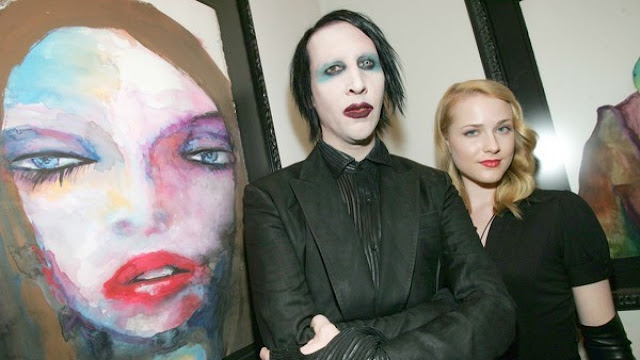 In various interviews, especially from 2007 through 2010, Marilyn Manson explained that while he was married to Dita Von Teese he was faced with a new reality he wasn't prepared to face. He was faced with a sense of responsibility that was calling for him to grow up and change who he was, essentially. This made him feel disconnected from himself, and drove him into a deep depression. He was also disgusted with the music industry, which was driving him to never want to make music again. It appears during this time he even lost the motivation to paint. Since being an artist is intrinsically who he is and it is something he could not escape from, he decided to make a horror movie called Phantasmagoria: The Visions of Lewis Carroll. Phantasmagoria was announced at the Berlin International Film Festival in February 2006. This movie became his primary focus.
It was at this time that Manson met Evan Rachel Wood at the Chateau Marmont in the summer of 2006, when he approached her with the intention of getting her to co-star in his film for the role of Alice in Wonderland. They struck a friendship, even though Manson was still married. The time of Manson's separation from Dita in 2006 between late October and December 29th, the day Dita filed for a divorce, was a particular low point for Manson, but when he and Evan began dating in January 2007 he felt more like himself again, even resurrected.
Dating Evan helped him get creative again the way he always felt comfortable. This is the main reason his horror film Phantasmagoria was delayed over and over again and has still not been made. It was originally a concept he created when he wanted to drop out of music and enter the film industry, but now that he was feeling creative again it did not remain his primary focus. As he explains in an interview with Rolling Stone in June 2007:
"Painting was the one thing that essentially helped me get back into being creative again, and unfortunately for the situation in my life, the first painting, which I called Pretty Persuasion, was a painting of Evan that I did, inspired purely by the fact that I was so excited that somebody else in the world had some sort of connection to me, because I felt very completely untethered, alone and alienated."
It's interesting that he called this painting of Evan Pretty Persuasion. In 2005 Evan Rachel Wood starred in the black comedy Pretty Persuasion, in which she plays a 15-year-old student at an elite Beverly Hills academy who falsely accuses her drama teacher of sexual harassment. If art imitates real life, as many of Manson's current accusers say of him, then why can't this film be used in the same way against Evan?
It was also at this time that Manson began working on his album Eat Me, Drink Me which was released on June 5, 2007. Manson describes this album as autobiographical, beginning with his separation from Dita but evolving into an album of seduction for the new love in his life. It is about a broken person who was trying to become whole again, though Manson would later criticize the album of promoting an unhealthy and cowardly form of romanticism, like Romeo and Juliet, indicating the idea that it is better for two misunderstood lovers to die together than be apart.
All interviews during this time from both Manson and Evan depict them as having a loving and healthy relationship, and when they broke up in late October 2008 every statement by Evan indicated that she continued to love Manson, that there may be a possibility of them getting back together, but their careers were leading them in different paths - and she was very adamant that Manson was not abusive in any way towards her.
There are indications however that this may not be the whole story. 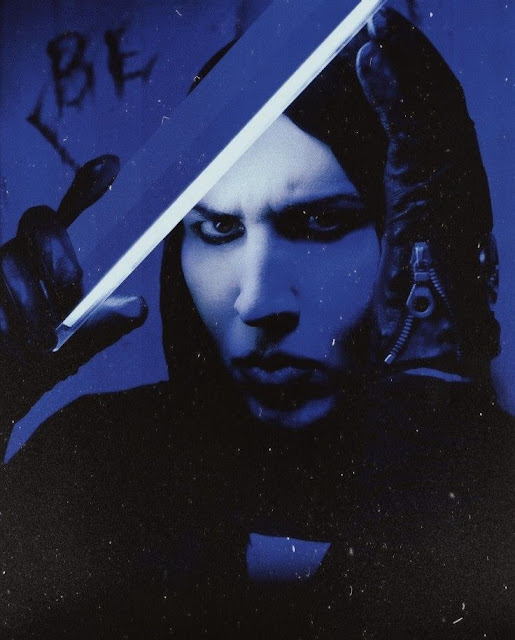 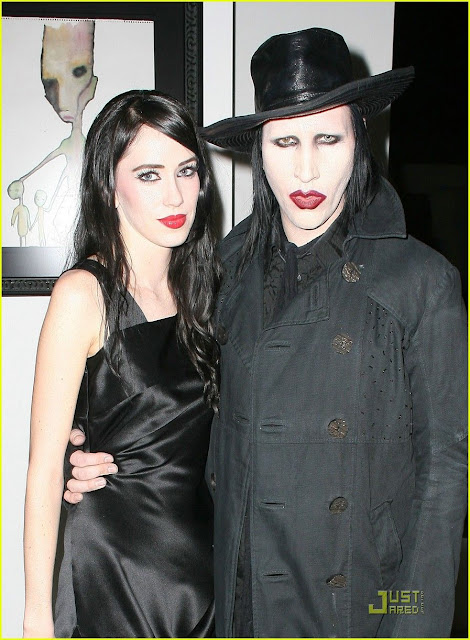 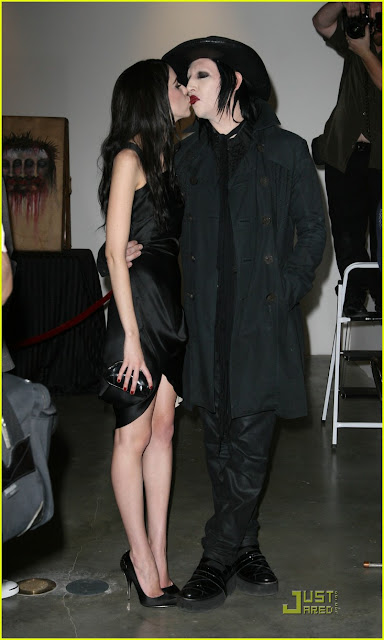 Isani Griffith
From the time of Manson's and Evan's first breakup in October 2008 till the release of The High End of Low in May 2009, it appears Evan was concentrating on her career and not involved in any relationship, at least publicly, while Manson does seem to have had one fling in December 2008, which he denied being a relationship, with 24 year old model and photographer Isani Griffith.
Manson appeared with her at an art exhibition in Florida on December 4, 2008 and introduced her as his "special lady friend", he as well made some paintings of her. They were seen kissing and holding hands in a romantic way at the art exhibition as well as some other times, and it was believed that she was his girlfriend. Shortly after her relationship with Manson became public, she deleted her MySpace profile. On December 24, 2008, Marilyn Manson posted a message on his official website claiming that she was not his girlfriend, and that he currently has no girlfriend. He wrote:
"Ladies and gentlemen, I’d like to make an announcement. The rumors that I found a ‘replacement’ for Evan, or that I have a new girlfriend are absolutely not true. I am finishing up my album, and I also have never even met Ne-Yo. I can assure him that he would not want to be associated with something this godless. Get over the holiday so I can happily ruin the new year for anyone that assumed music was going to stay boring and sweet. MM"
Keep in mind that this was written on Christmas Eve, which was the day before his infamous and alleged Christmas alone in which he horrifically scarred up his face and hands and harassed Evan with 158 phone calls. 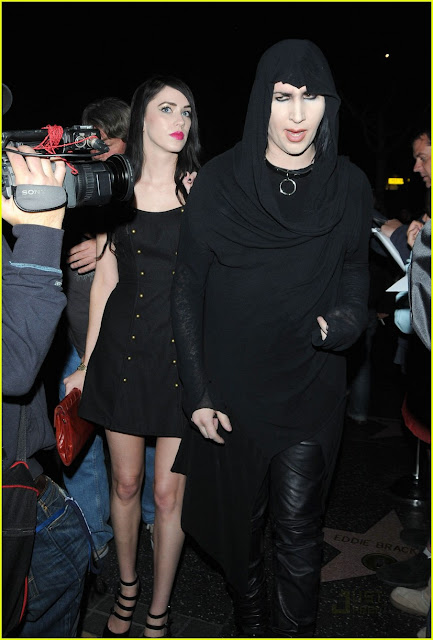 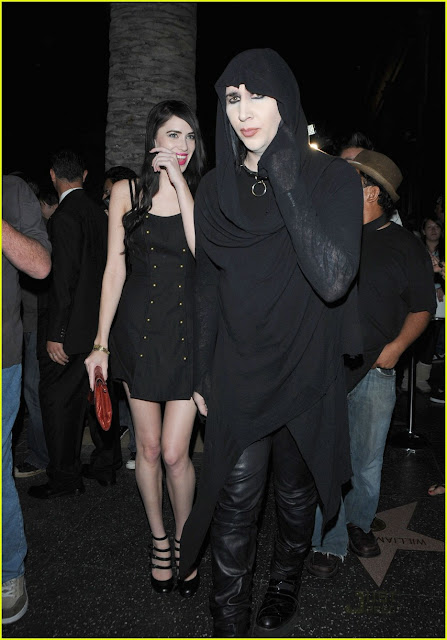 Six months later, on the 12th of May 2009, Manson and Isani Griffith were seen together again leaving Katsuya Restaurant. They had gone to the premier for Drag Me To Hell. The song 'Pretty as a Swastika" leaked on the internet the next day.
The second track on The High End of Low, "Pretty as a Swastika", was written about Isani Griffith. When asked about the title in an interview with Time on May 26, 2009, Manson commented:
"It's something I said to a girl because of her complexion — with black hair, red lips and pale skin. I mean, it was a complex and poetic comment that soon led to intercourse, so I felt no reason for it to be seen as confusing, hateful and destructive."
Isani Griffith does not seem to have made any comments about the recent allegations about Manson.
In February of 2009, Manson and Evan had a brief reunion. On Valentine's Day, Manson and Evan were seen leaving Nobu. There is also a photo of her from Valentine's Day laying on a bed. Later that month, they were spotted on the morning of the Oscars leaving LA’s W Hotel together. Not much is known about this reunion, except that Evan and Esme Bianco were filmed in February for the unreleased video of "I Want To Kill You Like They Do In The Movies". 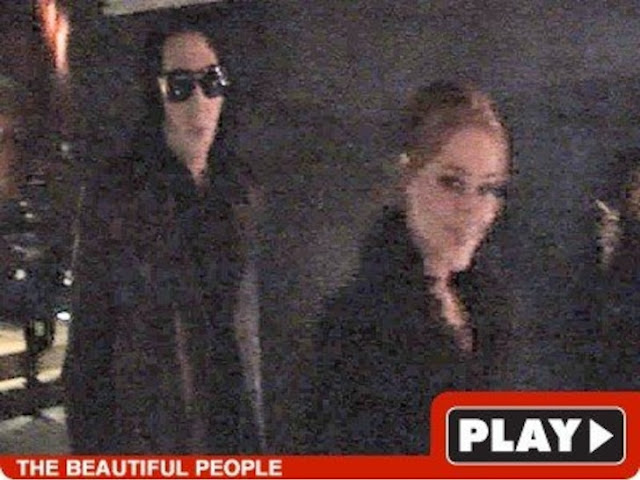 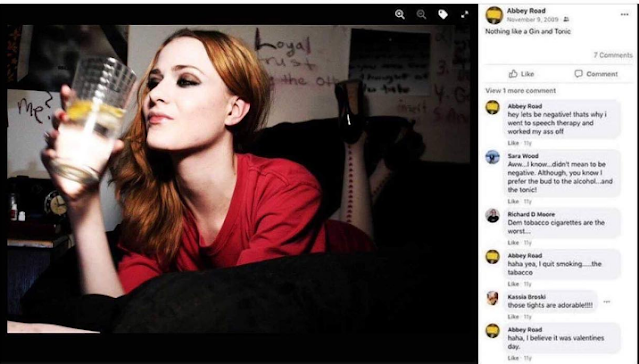 On April 23 of 2009 TMZ caught up with Evan where she revealed that she and Manson were "maybe" together. In this video Evan also exposes Manson as being charming and sweet when she says: "He's got a great sense of humor. I wouldn't date a man for three years if he wasn't very charming and sweet." This indicates the relationship that began in February could have still been on the table two months later. In fact, it was confirmed by Evan in an interview with GQ that was published in May 2009, where she said they were back together after "taking some time away from the relationship.
On June 5, 2009 it was confirmed that Manson was dating the pornstar and model Stoya. They were together when The High End of Low was released and she accompanied him on his next tour. Their relationship would last till November of 2009. More will be said about their relationship in the next post, among many other things.