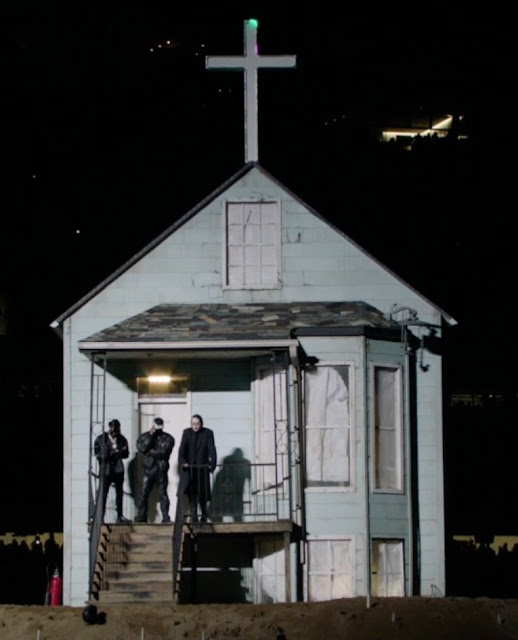 Manson appeared on the stoop of a church-like structure built in the center of the stadium. When photos of the construction of the structure circulated online before the event, many noted its resemblance to West’s childhood home. A notable difference however was the crucifix on top, transforming it into a church building.

Manson, along with a masked figure many online thought to be DaBaby, who has been facing his own controversies these days with what many say was a homophobic rant, walked out onto the porch alongside West as the first song of the event, rumored to be titled "Jail", began to play, which usually has featured a guest verse from Jay-Z, but at tonight's event a verse from DaBaby replaced it, seemingly calling out the controversy surrounding him: “I said one thing they ain’t like and they threw me out like the garbage.”

Manson for the most part just stood or sat there on the porch as the show went on. 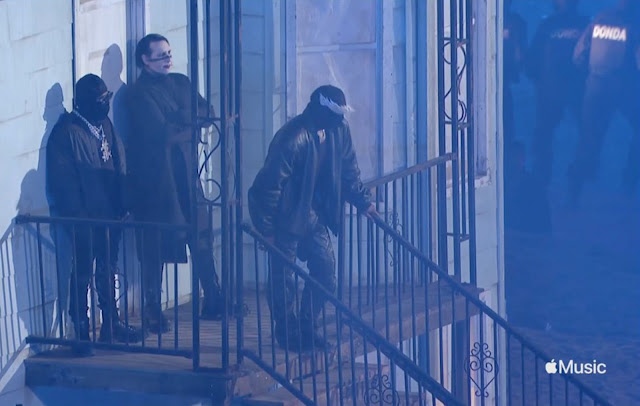 As far as media reaction, they weren't overall too bad, but here are some notable headlines:

Manson fans were obviously excited to see him after many months of silence, but he trended on Twitter with mainly jokes about how out of place he looked hanging out with a bunch of rappers on the porch of a church, and there were of course some negative comments also. Many Kanye fans even expressed complete disgust that he brought out Manson. 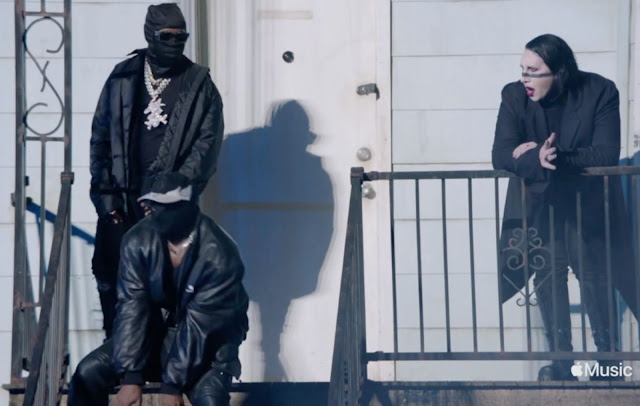 Besides the surprise in seeing Manson at Kanye's side, everyone wondered why Manson was there in the first place.

The fact that Kanye was flanked by two canceled and controversial figures, and he being a controversial figure himself, standing on the porch of a church with a crucifix above them, as Kanye sings music with the message of the Christian gospel, makes it sort of obvious that there is a message of redemption that Kanye wants to convey. The redemption that seems to be implied is a redemption from being cast away and voiceless in the midst of controversy and accusation. Kanye has been vocal in the past about the unfair treatment of the media and the entertainment industry in general at the first hint of controversy, prematurely rendering a guilty verdict primarily due to corporate greed and fear.
It is worth recalling how not long after Manson was falsely accused of the Columbine massacre over 20 years ago, Eminem also defended Manson and performed with him and collaborated with him in projects.
A rep for Marilyn Manson has confirmed through Newsweek that his voice will appear in Donda and will collaborate with him on the related project.
It is not clear whether or not Kanye believes Manson is innocent of what he is accused of, but it appears he is at least convicted by his Christian beliefs to not pass judgment and condemn someone who has not faced due process.

One thing is for sure - this is a positive development for Marilyn Manson. Kanye will get a lot of heat for this, but like Manson he has faced a lot of heat in the past and for this friendly and highly controversial gesture he should be commended.
Additional Note: We should not overlook the Holy Wood era black stripe makeup. I do believe this has significance, as this was the same black stripe that Manson wore in the Guns, God and Government tour during the Holy Wood era, symbolic of a victorious warrior in battle, a scapegoat, as well as innocence in a similar era of false accusation. 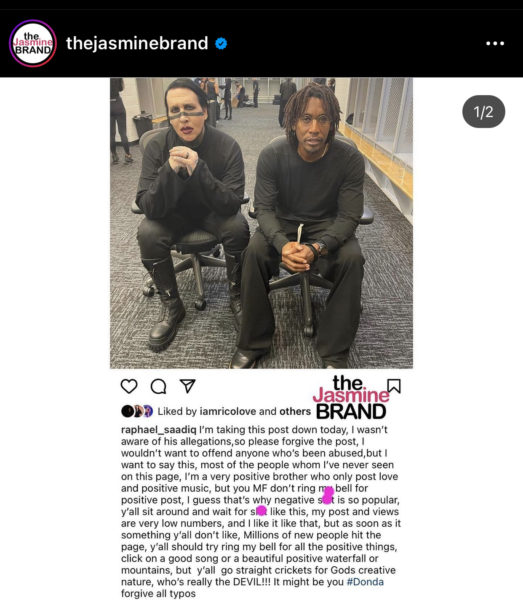 Update 1: It appears that Raphael Saadiq, who took a photo with Manson last night, now has regrets for posting it on Instagram after getting backlash. See his statement here. Kim Kardashian also is said to have been "blindsided" by his appearance, and through a rep said she would not have participated in the show if she knew Manson was involved. 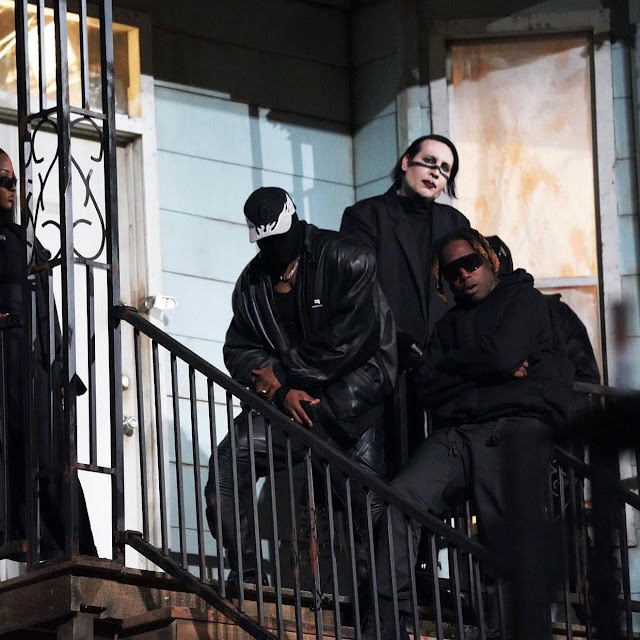 Update 2 (August 29): This morning Kanye West released Donda, where Marilyn Manson can be heard singing in the chorus of the track "Jail, Pt. 2". This is the first time since we have heard from Manson since the beginning of February. According to Kanye, he was not aware of the release, and when Universal initially released it, the only song missing from streaming platforms was "Jail, Pt. 2", apparently because the management of DaBaby had not approved his verse on the track. 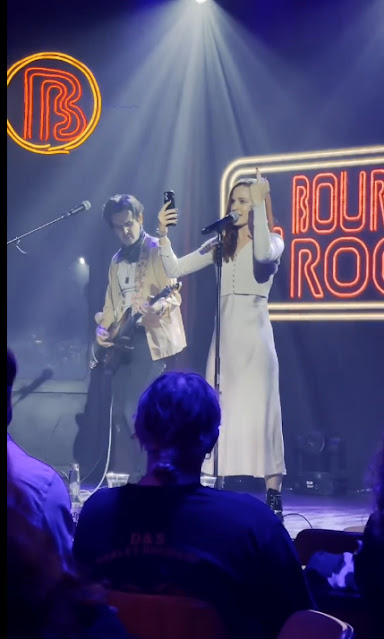 Update 3 (August 29): Since August 28 when Manson showed up onstage with Kanye, Evan Rachel Wood has been displaying on Instagram how triggered and horrible it made her feel to see Manson on stage again, which led to a post on Instagram today of her singing an unrehearsed version of "You Get What You Give" by New Radicals, which she dedicated to "fellow survivors". When she got to the point where Manson's name was going to be mentioned, she grinned and paused to emphasize his name and gave him the middle finger salute, to the confusion of and some cheers in the audience of thirty or so. She opened the song by saying: "I've been saving this but it seems like the appropriate time." This performance took place on August 28th at the Bourbon Room in Los Angeles. Clearly, Evan used this song by the New Radicals to show her radical obsession with Manson and her mission to destroy him in order to prop up her victim image which lends itself to her activism. 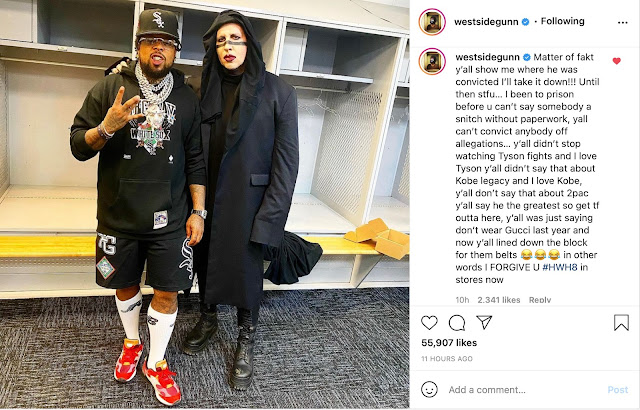 Update 4 (September 2): As the ridiculous negative press continues this week condemning Manson's presence at the Donda listening party and on the album, Rapper Westside Gunn took to Instagram this morning with a photo of himself together with Manson from the Donda listening party with a brave message of truth. Unfortunately, many of his fans didn't want to hear it, which probably led to his management persuading him to take down the post from Instagram, though it continues to remain up on his Twitter page.