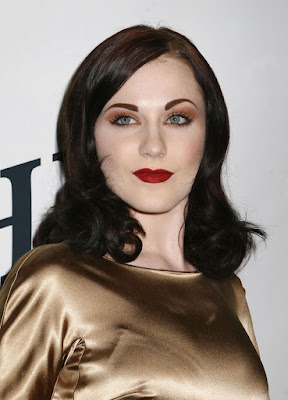 Marilyn Manson and Evan Rachel Wood began dating in January 2007 following his divorce with Dita Von Teese on December 29, 2006. In October 2008 they broke up, though both indicated a possibility of coming back together in the future, but cited their separation as taking place because they chose to focus on their careers away from each other. They both reportedly dated other people during their time apart.
In early November 2008 Evan issued the following two statements about her breakup with Marilyn Manson:
1. In early November 2008 People magazine featured a short article titled "Evan Rachel Wood Defends Marilyn Manson Breakup", where she responded to false claims being circulated concerning their break up, such as Marilyn Manson kicking out of his guest house Evan's brother Ira who supposedly overstayed his welcome, and for being controlling and emotionally abusive in their relationship. She explained:
"Manson and I both decided to take some time apart so we could concentrate on work. Someone used that opportunity to kick us while we were down and sell a completely false story. Manson owns the house he lives in. My brother has never stayed there and the person that said such horrible things about Manson being ‘controlling’ and 'emotionally abusive' is certainly no source ‘close’ to me. Manson has been by my side and taken care of me through the best and worst times. I love him as a person and as an artist. I will always be proud to have been a part of that. If any more attacks are made on us, it is the act of a desperate, selfish person, who is angry to no longer be a part of my life. No further comment will be made and we request our privacy at this time."
2. Us Magazine interviewed Evan on November 9, 2008 at the Hamilton Life Behind the Camera Awards in Hollywood, asking about her break up with Marilyn Manson:
"I’m always going to love him and respect him,” she told them.

Asked how she is feeling, she told reporters, “I’m doing fine, you know, as best as can be expected.”

She denied reports that they called it quits after Manson kicked her brother Ira out of his guest house.

“You know, it’s not the nasty thing everybody thinks it is,” she said. “We’ve both got incredible things going on right now. He’s making an amazing album – I’ve heard some of it, and he should be very proud of it. You know, I’ve got The Wrestler going on, and I’m focusing on that,” she added.

Of the split, she said, “It’s not a bad thing. It’s life – it happens. But now, it’s like the story that comes right after the breakup: Who am I dating now?” she said. “So right now, I’m just enjoying being on my own. It’s just not in the cards right now.”

Concluding Remarks:
Following their first breakup in October 2008, Evan had nothing negative to say about her relationship with Manson. In fact, when she would be asked if there was a possibility of them getting back together, she would tell reporters that there was a possibility, though there were no plans to do so. She would further defend her relationship with Manson and give clarification to reports that Manson was controlling and emotionally abusive by emphatically denying any such claims.
The two would have a brief reunion in February 2009.