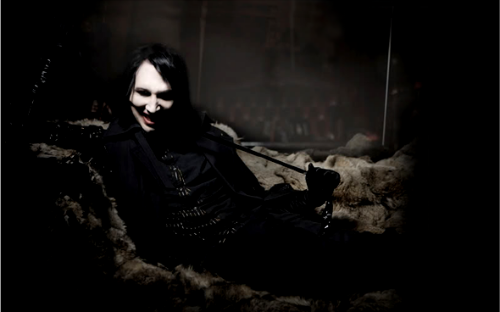 After the interview Colonel Kurtz did with Marilyn Manson's friend Manzin in December 2021, in which he exclusively revealed that Manson told him in early June 2010 that Evan had just had an abortion with another man's baby (see here and here), no doubt Evan Rachel Wood had to scramble to respond to this bombshell before the premier of part two of Phoenix Rising in March 2022 in which she put forward the story that she became pregnant not by another man but with Marilyn Manson's baby because he refused for himself and for her any form of birth control. Marilyn Manson himself has yet to give his official position on this issue. However, I recently discovered that it seems he did make some sort of an announcement about Evan's pregnancy all the way back in 2010.

When I saw the interview with Manzin, my memory recalled something I had read a long time ago on the internet, possibly a few years ago or maybe even over a decade ago, I can't recall exactly, of a rumor that was being treated as fact by fans, that while Manson and Evan were a couple she became pregnant. It was I who considered this a rumor, because a lot of rumors have circulated about Manson that I always would wait for confirmation from a reliable source. Presently, any search to find an original trace of this rumor online will be done in vain.

A few days ago, however, I was doing some research on another topic, when I came to a Spanish website dedicated to Manson that has reliably captured most news updates about Manson for years, which I have used as a reference for many things in the past. It was then that I came to this page (here) from February 17, 2010. Since I don't know Spanish and I was curious to see what it says, I put it through Google Translate and this is the relevant section that I read:

Last week on Saturday until Tuesday there have been several news stories about Marilyn Manson, one or another rumor and others confirmed according to what was said by Manson himself. These news stories were published by the Mansonwiki site...

Manson and Evan To Be Parents

The Mansonwiki website published in its news column a possible pregnancy of Evan Rachel Wood, but the most curious thing about this is that according to the site Manson himself confirmed this news through a message on Facebook, which incidentally several fans claim to have read this message, but after a few minutes Manson deleted it, and the new album would be reflecting Manson's feelings about this.
Now keep in mind, this is a very reliable website on daily news updates, but for some reason, of all the days, it did not keep up with the news during this particular week, and it just gave summaries without providing quotes, as is more usual with them. Nonetheless, we will work with what we have. And what we seem to have here is a confirmation of what I had recalled. As far as I know, this is the only place that still preserves this rumor (which has since been confirmed) that Evan was pregnant while she was with Manson.

Let's break this down.

According to this Spanish website, Mansonwiki announced in its news section something that Manson posted on Facebook, but then deleted, which was interpreted to mean that Evan may be pregnant. The possible dates for this posting were sometime between February 13th (Saturday) and February 17th (Wednesday).

I went to Mansonwiki, and could not find this message in their news archive. I looked it up in the Wayback machine, and it wasn't there either. The only thing I could find from within those dates was this:
On February 14th, 2010, MarilynManson.com was updated with this message: "On this, the Day of Souls, the celebrations of death end with an offering. Only by prayer and by sacrifices of the masses may the dead be cleansed from sin and attain the Beatific cally acclaimed music video..." This was found at 7pm GMT and has since been removed.

Though this is not the Facebook message with the rumor of Evan's pregnancy, we do find that this post from Manson's official site was likewise removed.

If we go back to the Spanish website, we also read further down on the same page:
On February 16, Marilyn Manson reportedly posted a message on his Facebook (later deleting it), saying that the new album would be 'like a series of degradation episodes'.

Here again we have Manson posting then deleting another message within this time frame of February 13-17. I believe Manson opened his Facebook account on February 1, 2010, so perhaps Manson was trying to figure out how to use this new social media platform. But still we are left with a possible rumor that seemed to be confirmed by Manson in mid-February 2010 that Evan was pregnant. But why did he delete it right away without explanation after several people reportedly saw it? There seems to be three possibilities:

1. Manson was just joking around or was mistaken or was premature in his announcement.

2. It was decided to not keep the baby and have an abortion.

3. Manson found out that the baby wasn't his.

A fourth possibility could also be that the fans completely misinterpreted the message and it had nothing to do with Evan being pregnant.

I don't know the answer to the question of whether or not Manson posted on social media in 2010 that Evan was pregnant, because I have not read the original message. Perhaps someone reading this captured the message and would like to share it?

If it is true, then it leaves us wondering why Evan waited more than three months after this to have the abortion. By the time she even found out she was pregnant, I would assume at least 6 to 8 weeks had already passed since she became pregnant.

When all is said and done, it seems like we are left with more questions than answers due to the lack of further and clearer information. If Evan knew she was pregnant by the middle of February 2010, and she and Manson were engaged at the end of December 2009, it would seem odd that Evan would cheat so soon on Manson, especially when she described their engagement at the time as something to make real how they felt about each other. If she was indeed pregnant by another man, it must have been earlier, perhaps November. We are still left with the question why Evan would wait six months for an abortion if she knew she was pregnant within two or three months. Does this indicate she may have wanted the baby initially? Was she pressured because her first completely nude scene was approaching for Mildred Pierce? Is this another factor as to why Evan was in such a dark place while filming Mildred Pierce? Is this the real reason behind her alleged suicide attempt that supposedly took place less than a few months afterward? We all know how much it means to Evan to be a mother. Of course, there are a number of possible answers.
It is also interesting that Manson is reported to have said that his feelings about the pregnancy will be a feature in his next album. His next album was 2012's Born Villain. There are possible references to it in the album, especially if you look at songs like "No Reflection" and "Children of Cain", or even if we assume the title of the album itself has something to do with it. We can only speculate.
One mystery opens the door to other mysteries. There is more to the story here that may come to light in the coming months.